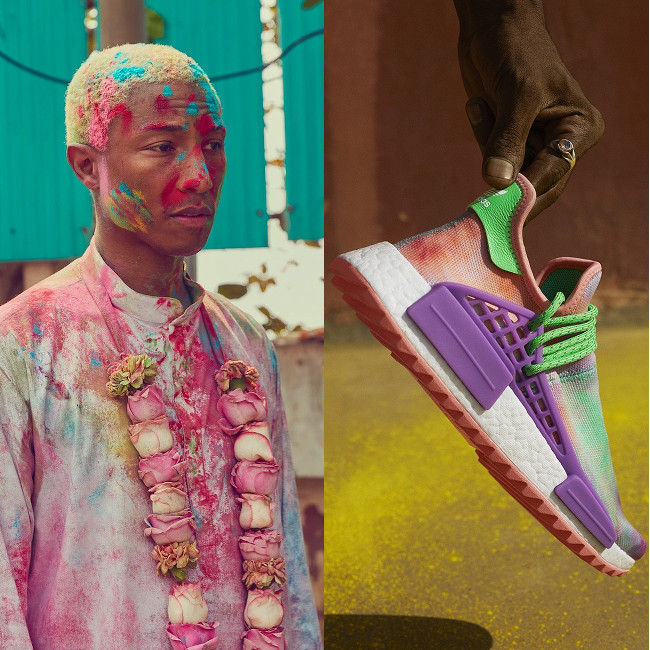 
The collection is inspired by Holi, a Hindu spring festival that is celebrated primarily in India and Nepal. “Hu Holi” features sneakers and sweatshirts with patterns based on the colorful powders that are often thrown during Holi festivals. Many feel that that these items, with sneakers priced at $250, cheapen the meaning of Holi.

In a statement posted to his website, Hindu cleric Rajan Zed called the Adidas x Pharrell “Hu Holi” collection a “trivialisation of traditions-concepts-symbols-beliefs of Hinduism.”
“Pharrell Williams and Adidas should have done some homework before taking Hinduism concepts frivolously and using these to make a fashion statement and sell shoes for mercantile greed, some of which contain leather,” the statement reads.

“Inappropriate usage of Hinduism concepts or symbols or imagery for commercial or other agenda was not okay as it might be painful to many devotees.”

“Hu Holi” was also called out on social media:

Uhhhhh @Pharrell and @adidas trying to make people dish out $200 for a "Holi Hoodie?" You know people can wear anything white to Holi and get this look for free right? Not saying you're trying to capitalize on a Hindu holiday but…. pic.twitter.com/aRRXWPmKxE

Adidas says the collection is inspired by the "magic and beauty" of Holi, a Hindu spiritual festival. *eye roll*https://t.co/hMcd9rWFMX

A spokesperson for Adidas has since responded to the controversy:

Hu was founded upon the principles of unity, equality, humanity, and colour with an intention to explore humanity and celebrate diversity around the world. Together Adidas Originals and Pharrell Williams use the platform to help tell stories of others from around the globe.