This morning, Twitter was ablaze with devilish glee at the sight of several leaked, unretouched, photos from Beyoncé’s 2013 L’Oréal Paris cosmetics campaign. The images reveal fine lines, some puffiness, and quite a bit of acne. Some fans are speculating that the images are actually fakes.


While members of the Beyhive, and regular old fans like me, have been going hard to defend Queen B, most of the reactions to the leaked images have been rather spiteful. For years, Beyonce has been dogged with accusations of skin-bleaching, plastic surgery, and of course there’s the constant need by many to point out the fact that she dyes her hair blond and wears weaves. This particular photo leak feels more like an unmasking, rather than an example of how stars are “just like us.”

Last week, when unretouched outtake images of 48-year-old supermodel Cindy Crawford, from a 2013 photoshoot for Marie Claire Mexico and Latin America, were released by a journalist via Twitter, the apparent negative was quickly turned into a positive. Crawford received overwhelming messages of support from many women’s publications and regular women who noted that the veteran model’s sun damage and loose skin looked “just like theirs.”

The conversation around the leaked images of Crawford is part of the ongoing push to ban the use of Photoshop in fashion images. Brands and publications have even joined in. Beauty brand Dove is considered a pioneer for it’s all-natural campaigns showcasing diverse groups of women. Last year, lingerie brand Aerie, on offshoot of American Eagle, followed suit with an ad campaign featuring unretouched models of all shapes and sizes sporting bras and panties. Canadian fashion magazine FLARE recently released a March 2015 cover with a bevy of unretouched teens. 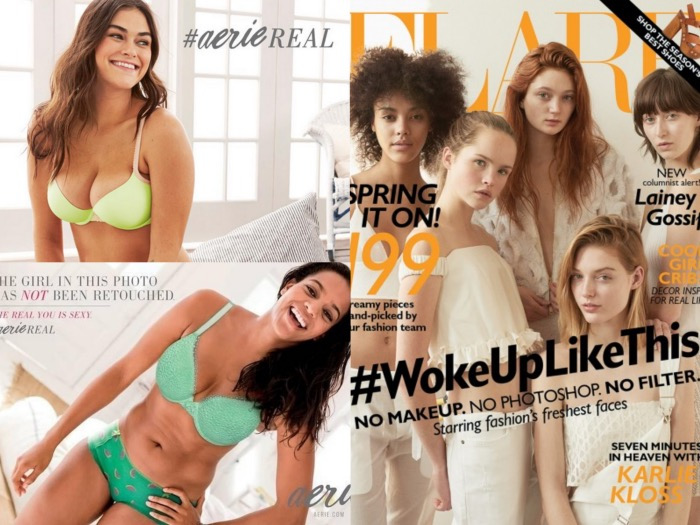 All of these covers and campaigns feature mostly white and lighter complexioned models, with clear skin, in soft, flattering, lighting, as opposed to the harsh lighting employed in the Beyoncé and Cindy Crawford photoleaks. As anyone with photography experience knows, lighting is tantamount. But for women of color, especially those with darker skin, lighting can often be our worst enemy, among other things. When you at look a professionally rendered image of a beautiful black woman, you might be looking at beauty that had to contend with make-up that wasn’t quite right, lighting that was slightly off, and hair styling that barely accommodates her particular hair type. The beauty industry, the photography industry, and the fashion industry were all built on Western beauty ideals, and subsequently tested and refined by using straight hair and white skin. Images of people of color didn’t become common and widespread until well after the inception and ubiquity of photographic technology,

As photographer Syreeta McFadden notes in Teaching the Camera to See My Skin: Navigating photography’s inherited bias against dark skin,

The absence of our likeness accurately rendered in photographs is one more piece of the construct of white supremacy. Film stocks that can’t show us accurately help to control the narrative around appearance, and shapes our reality and the value of our lives in American society. If we are invisible, we are unvalued and inhuman. Beasts. Black bodies accepted as menacing, lit in ways that cloak our features in shadows.

Retouching is a necessary evil for people who have to contend with a system of technology that spans nearly 200 years, but has only included them for about 60. There’s also the issue of consent. Many of the early photographs of people color are colonial-era images used in an anthropological context. We were the literal “beasts” McFadden writes about — mere curiosities without actual humanity.

Issues of curiosity and consent still persist when it comes to images of well-known black women like Beyoncé. The leaked images were released without her consent, or the consent of the artists that helped create them. There’s a never-ending desire to know just what she’s hiding under there, to reveal the “beast.” This isn’t the first photo leak that Mrs. Carter has tempered. When news that her publicity team had asked several online outlets to remove unflattering images of the mega star in the middle of dance moves during her 2013 Super Bowl performance became known, the request was met with derision, which rapidly snowballed into a Streisand effect. The images were gleefully shared on every corner of the internet and quickly turned into memes, many of which joked about her “masculine” appearance.

Beyoncé’s styling, music and overall appearance are not only used against her when it comes to conversations about beauty standards, but they are also often invoked to doubt her feminist cred. As a black woman, she’s forced to prove both her ideological, political, and physical authenticity in order to confirm her feminism. To many of her detractors, she simply can’t be both an influential artist and thinker in booty shorts, a weave, and photoshop.

The push to “ban” photoshop is yet another empowerment campaign that doesn’t acknowledge that “seeing yourself as you truly are” is more complicated when you’re a woman of color.