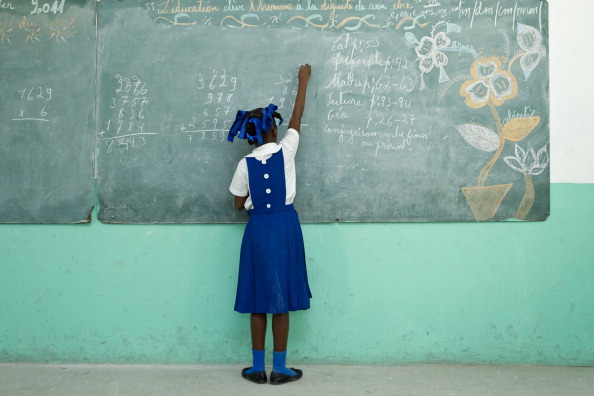 My shirts were always crisp, and my knee socks were brand new inside my polished leather Mary Janes. My hair was pulled back, tightly, with bubbles and bows that matched my ugly plaid school uniform. I never left the house without a slip under my under my skirt.


Mornings smelled like hot coffee, starch, the heat of an iron, hair grease and hair spray. The housekeeper would spend half the day ironing, washing and starching everything from shirts to undershirts, to even socks and tights. I thought it was simply cultural. Fifteen hundred miles away there were little girls who looked just like me, with names just like mine, who went to school each day in gleaming white shirts. Their shirts were washed by hand in a river. My shirts were cleaned in a washer/dryer that barely fit in our medium sized apartment. It nearly flooded the apartment on more than one occasion; it also annoyed our landlord.

I longed for the carefree existence of the white children I went to school with. They wore hand-me-down uniforms, messy ponytails, and chipped nail polish. I eventually learned, the hard way, that they didn’t even wear slips underneath their skirts. Sometimes their shoes were scuffed.

I would frequently come home with sand in my hair and undone braids, missing an earring, a bubble, or a clip. The unmatched adornments would be amassed in an old cookie tin. My mother always had replacements. Sometimes she bought them on sale, sometimes they were gifts, offerings in a house where you could never enter or leave empty handed. My mother and my aunts were always buying up socks, hair clips, and bubbles and distributing them among the girl cousins. Every performance needs believable costuming.

I’d watch my mother and my aunts code switch. One second, it was harsh direct broken accented English mixed with Kreyòl and touches of other West Indian Patois, the next, it was sweet smiles and the King’s English when greeting neighbors or talking to teachers. They had perfected the art of frivolous, Americanized small talk.

“How about this weather?”

“She’s so excited for the math test!”

“Yes, she has gotten so tall!”

This was their way of adapting to the racialized gender politics in the United States. They needed to mask their exhaustion, worry, and frustration, lest it be mistaken for anger and hostility. I learned early on, that I had to look effortless while trying my hardest. I learned nothing about me could appear too abrasive or coarse , from my speech to my manner of dress, to the hair on my head.

The unspoken rules for raising the loaded gun known as a little black girl are still in place. It doesn’t matter if her name is Blue Ivy, Zahara, Willow or “the black girl who sits in the third row, what was her name again?”. It doesn’t matter what language she speaks or how her name is pronounced. Her socks need to be white, her hair needs to be soft, braided, and pulled back, and she always needs to be wearing her slip.