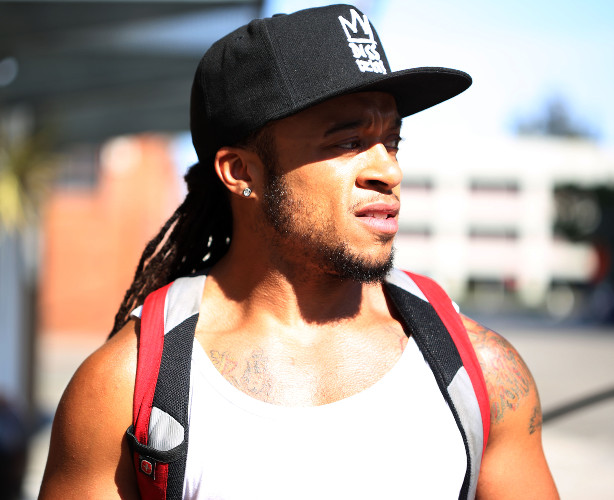 I recently had the chance to chat with transgender actor and activist Kingston Faraday after I attended an event put on by Lambda Legal here in Atlanta. Here’s what Kingston had to say about the filmmaking process of Black Is Blue, in which he played the lead character “Black,” a transman who is forced to confront his pre-transition past.


It was awesome [laughs]. It was also hard and scary. Mainly because there’s a tendency for dominant culture to look at a single person as a representative of an entire subjugated community. So for me, there was this internal conversation of wanting to cover everything, to be perfect, because I knew that there would be critiques. I remember having to remind myself that there isn’t one trans* story, and this trans* story is just as important to the collective narrative as any other. I also had reservations around making myself so visible. Those deeply ingrained narratives surrounding security and safety definitely surfaced. I had to process through this overarching question of what it meant for me as a black transgender man to put myself out there as a black transgender man bringing visibility to black transgender men. Ah! You wonder how you’ll be perceived and what kind of backlash will result from being visible. Will colleagues at work find out and treat me differently? Will my family be negatively impacted? Am I going to become a target? All of those issues were very real for me.

On the flip-side, it was incredibly inspiring to work with Cheryl Dunye (Watermelon Woman, The Owls). She’s such a creative mind, just an awesome person in general. Being able to witness her artistic process so closely transformed my own process into something much greater. Plus, I felt comfortable with Cheryl. She is someone who has been around for a long time; she really addresses a lot of stigmatized issues in her films that tend to be overlooked by the mainstream. Her brilliance lies in the way in which she addresses these issues. She does it with such finesse. Never exploitive; so just seeing her do that was phenomenal. On top of that she allowed me a space to integrate my firsthand knowledge of the trans* experience on set around her script and writing. She was so open in the collaborative process and open to my ideas and I really appreciated that. Looking back I realize I had one of those once in a lifetime experiences.

Go over to Afropunk, to read the entire piece.