The Most Important Gun Ownership Essentials That You Need to Have 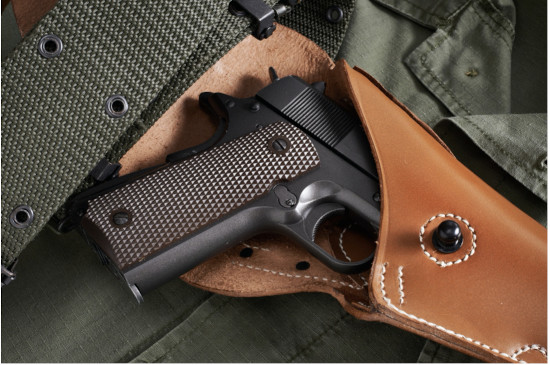 Gun ownership requires a lot of planning, awareness, and possession of the right gear. If you lack those things, you put yourself and others in danger.

If you’re looking to get into firearm ownership, it’s important that you have an understanding of the gun industry, different types of guns, and the best firearms available to suit your needs. It’s also key that you have all of the range bag essentials.

We’re going to talk about these ideas today, giving you a clear idea of the gun ownership essentials. Hopefully, the ideas below can help you understand safe firearm ownership.

Know Your Intentions, Know the Risks

Before you get started with your range bag, you have to go through the protocol and get all of your safety training and permissions in order.

The first thing to do is to get your permissions figured out. Ask yourself, “what do I intend to do with this gun?”
Is the firearm something that you plan to use at the range? Is it something that you want to keep at home in order to protect yourself? Do you think that you’ll bring it with you when you go out into public?

These are all considerations that require a lot of attention and appreciation. Gun ownership isn’t something to take lightly and the presence of a gun increases your own risk of danger considerably.

That isn’t to say that having a gun doesn’t improve your ability to protect yourself. It’s true, though, that individuals who have a gun on their person are 4.5 times more likely to get killed by a gun.

That figure is open to interpretation in terms of why the number is so high. It could be that those with guns feel more confident to deal with other shooters, or that the presence of a gun triggers the fight or flight response of combatants. In any case, the reality is that guns require knowledge and safety.

Part of that process is knowing precisely why you intend to carry the gun in the first place. Once you get that figured out, it’s time to look to your local laws and regulations.

You have the second amendment right to bear arms, but that doesn’t mean you can brandish a gun in public without just cause.

Open carry laws vary across the country. To “open carry” is to have your weapon on your person, in a holster, and visible to the public eye. If it’s concealed, that puts you into an entirely different territory.

“Concealed carry” laws are even more restrictive in the United States. The thinking is that those who would conceal their gun might have criminal intentions.

Most states in the US allow open carrying without a permit. Other states have general open carry allowance with particular local restrictions in different jurisdictions.

California is an exceptional case in that its open carry laws are ambiguous depending on where you are. In the case that you live in California, pay close attention to your local gun laws in relation to the state laws.

Finally, numerous states such as Illinois, Kentucky, Florida, and New York do not allow open carrying. In any case, it’s crucial to look at state laws and follow the established paths to get permission to carry your firearm in whatever way you choose.

Failing to do so could put you in difficult legal situations. Further, even if your state has allowances for concealed or open carry, make sure you look at concealed carry reciprocity maps to know where you can have your gun on your person.

The best firearms for your personal situation will depend on what you plan to use them for. A good multi-purpose route to take is a simple handgun. Smith & Wesson handguns are reliable but they’re a little more expensive.

Glock handguns tend to be small, lightweight, and contain comfortable designs. Those are important factors for those who don’t plan to use their guns all that much but would like to have them accessible if they ever find themselves in danger.

A lightweight, sleek handgun is the optimal choice when it comes to self-defense. You also want to ensure that it’s a reliable firearm. Don’t risk your safety by purchasing a low-quality gun that could misfire.

Misfirings and jams put you in situations that are incredibly vulnerable. If you’re in danger and you brandish your weapon to shoot, you want to know that the shot will fire. If it doesn’t, you’re exposed to that danger twofold because the situation heightens when you use your weapon.

So, make sure that you invest in quality.

Rifles for Hunting and Defense

If you’re a concealed carry type of person, you’ll want a small handgun. For those who are looking to defend themselves at home or use their guns for hunting, a rifle will serve both purposes.

You want to invest in accuracy when it comes to hunting rifles. The best all-around hunting rifle is the Ruger in most people’s opinions. The Remmington brand is another great place to look for hunting rifles, while there are a lot of other options that aren’t as expensive but will do the trick.

You can play around with fun options like scopes, decals, and other accessories with hunting rifles, too.
For many people, improving their accuracy and getting out into nature is a primary hobby. Once you establish the fundamental safety factors and get the right weapon, you can invest a lot of time and attention into the gun.
It’s a passion for many. There’s no limit to how good you can get at shooting, how much time you spend out in nature, or how much you understand the gun, or guns in general.

All of these things improve your ability to use the gun in an effective manner. Whether that means defending yourself or shooting a can from 500 yards, it’s a positive hobby to get into.

Other Guns to Choose From

Beyond rifles and handguns, you start to exit the beginner’s range. Shotguns are another possibility, but they’re a little bulkier and harder to manage.

The shotgun is a self-defense weapon if it needs to be, but it’s mostly used in hunting applications. The military doesn’t utilize many shotguns in combat training, for example. Shotguns are excellent options for bird hunting.

Assault rifles are another step beyond that level of difficulty. There’s a lot of debate as to whether assault weapons should be available on a consumer level. Their application was primarily warfare-based.

In fact, assault rifles were created to meet the needs of soldiers in battle during World War Two. Modern assault rifles biggy-backed on the advancements of those early weapons, and they’ve become incredibly effective, very deadly devices.

That doesn’t change the fact that they’re enjoyable and empowering to shoot at the range. It’s hard to justify non-warfare applications for their use, though. That said, anyone is free to buy and use them so long as the state laws allow, and so long as the person follows regulations.

Outside of the guns themselves, there are a few other things that you should try to keep in your range bag at all times.

The same is true if you’re out hunting or shooting your gun in any other application. The first thing to invest in is quality eye protection.

Normal glasses or sunglasses aren’t good options. They’ll shatter, and could even do more damage to your eye than debris would. All ranges require that you have shooting glasses or goggles, so many of them will provide a standard pair.

You should have your own, though, as you can’t always trust the quality of range goggles. It’s also cheaper to get your own pair and have them each time you go.

You’ll also want to invest in ear protection of some kind. Earplugs like the ones that musicians use are a decent start, although they’re not always rated for the decibel level of guns.

Guns are louder and more piercing than the scream of any amplifier you’re likely to find. So, you can also look for earmuffs or invest in earplugs that are rated for shooting ranges.

Finally, you need to have a storage unit for your gun. Whether that’s a case, a holster, or a bag, there needs to be something in your bag that stores your weapon safely. It’s also wise to get a case that locks and locks well.
If you keep the weapon in your car or you have small children in the proximity of the case, it’s imperative that the lock is secure. For those with kids, it’s a necessity to invest in a gun safe.

Gun ownership is a great thing for those who practice safety and set healthy guidelines for themselves. There’s a lot more to learn about owning a firearm in the safest and most effective way possible. We’re here to help.

Explore our site for more ideas on staying safe, the best firearms to buy, personal wellbeing, and much more.