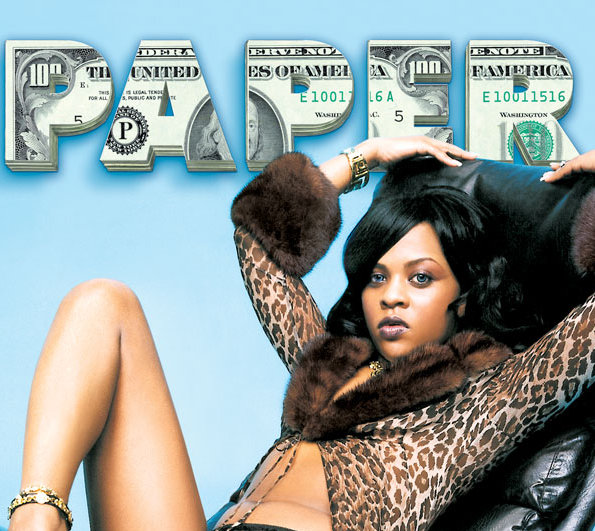 Check out this gem of an interview that was recently republished by Paper magazine of bell hooks interviewing The Queen Bee Lil’ Kim. The interview was originally published back in 1997.


And if you have a chance to see girlfriend up close and personal, you’ll know why. Young, pretty and sweet — just plain old-fashioned feminine — Lil’ Kim has the kind of innocence it’s possible to work with and work over. It’s always folks who’ve never been on the streets, who have never known down-and-out-nowhere-to-go, who believe innocence can’t be found there. But it can, and Lil’ Kim embodies it, having done her time on the streets. Her “real life” sex thing is just about pure and simple delight in the body. But when it comes to how the boys in charge package her, it’s the same old shit  — boring straight male porn fantasy.

More dangerous than any words that come out of Lil’ Kim’s mouth are the forces of repressive puritanical morality that seek to silence her. Before talking to Kim, I spoke with lots of so-called cool folks who were putting her down, calling her a “ho…nothing but a prostitute.” Even the dudes who are into her gig — fans of her debut album, Hardcore (Undeas/Big Beat/Atlantic), and her work with Junior M.A.F.I.A — still see her as another version of “pussy galore”: a freak for their pleasure. And then there are the boys who pump her up as “sexy feminism.” Gimme a break! Ain’t nothing wrong with sex work, ’cause a girl’s gotta do what a girl’s gotta do. And every girl I know who is working a sex tip has her reasons, but it ain’t about sexual freedom. It’s about getting paid. Lil’ Kim knows that. She’s seen and done it all. She knows when it’s fantasy and when it’s real, when it’s about getting paid or getting free.

Bell Hooks: We have a lot of things in common. We’re both into being bad girls, into fashion, into talking on the down low. So I’ve been really pissed off: I’ve been talking to folks about you and they keep saying, “Oh, she’s a ho.” And I keep thinking, Well, all these dudes, when they’re talking shit, they’re not ho’s. Nobody talks about John F. Kennedy being a ho ’cause he fucked around. But the moment a woman talks about sex or is known to be having too much sex, people talk about her as a ho. So I wanted you to talk about that a little bit.

Lil’ Kim: Well for one, I can say that I do not have too much sex. I hardly have any sex, O.K.? A lot of people get the wrong perception of me. I talk about all that sex I was doing as something I went through in the past. I did all kinds of freaky things after every show.

BH: When did you start thinking of yourself as a sexual being who had a right to her sexual desire?

LK: I guess as soon as I started, really, which was in my late teens. But even before I was rappin’, it was like whatever I wanted to do, I just did it. I became free with it, like, “Whatever, yo. I don’t care if he tell his friends.” ‘Cause you know, when you’re younger, it’s like, “I don’t want you to tell your family. No, don’t tell your friends if we have sex.” But now it’s like, “We havin’ sex. Tell whoever — make sure you tell ’em how good I did it!”

BH: So I look at you and you look like you’re about 12, and you are cute — clearly a really naturally beautiful woman, Kim. But now, to what extent have you decided this is the image that you wanna project? Or is it the men behind you who are deciding this image?

LK: O.K., we all had a lot to do with my career; we all have our input. I would say that it was me who just started it, because I would have to do it and feel comfortable, you know what I mean? You can’t really just make someone into something and it works all the time; that person has to be a natural.

BH: But I mean, you are just so fine in your natural self, but your image is all about excessive glamour.

LK: Well, you know what, when you’re dealing with people in an industry that’s all about making money, they push you farther than you really wanna go.

BH: Girlfriend, tell me about it. Don’t I know it.

LK: And then when you’re desperate and you really wanna make money, it might seem like this is gonna work. Whatever it is, you go with it.

BH: What was your line on Hardcore, “Take it up the butt”? Don’t be funnin’. What do you think about that?

bh: Tell me what you mean when you say it’s real — that a lot of people are getting fucked in the butt?

LK: Exactly. I mean, there are a lot of women out there who are doing crazy things behind closed doors sexual-wise and are afraid to admit it. And I’m like, “Yeah, I take it in the butt. That’s right. Whatever.”

BH: A lot of people are talking about you as an example of sexy feminism, as a liberated woman. What do you think? Do you think you represent the liberated woman or the sexy girl of men’s fantasies?

LK: Both. The reason why I say both is that we have been set back years — everybody says that. Sometimes they say I set back women’s liberation.