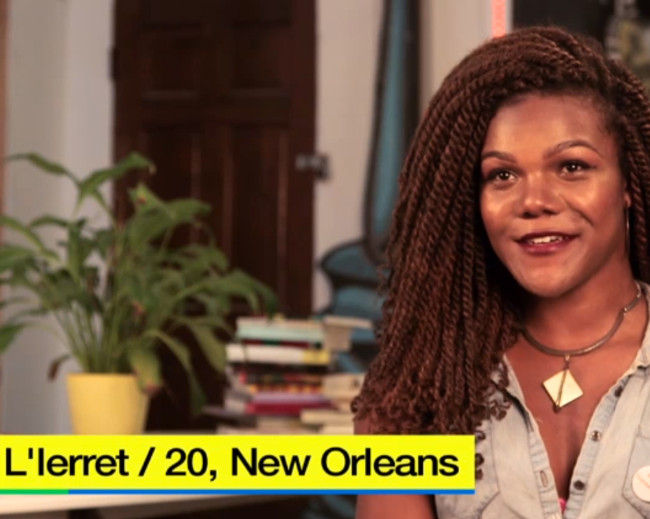 Laverne Cox Presents: The T Word recently premiered on MTV and Logo Friday, October 17th. The forty-one minute documentary follows seven transgender youth, all ranging in age from twelve to twenty four years old. The program delves into issues ranging from passing privilege, which is basically when someone can “pass” for the gender they have transitioned to, to the complexities of dating while trans, with the ever looming question: to tell or not to tell, as well as proper pronoun usage.

The first character viewers are introduced to is Kye Allums. Once a college basketball player who hooped at George Washington University, Kye had the unique experience of being the first college basketball player to come out as trans. He eventually left the game and now educates folks about transgender issues. Kye had a hard time with his mom fully accepting his transition from female to male; his mother also struggled with correct pronoun usage when addressing Kye, if any at all. Viewers then met a slew of others subjects, among them L’lerret Ailith, a college student who was attending a private catholic HBCU in New Orleans during the filming of the documentary. L’lerret touched upon the stigmatization of trans people of color as a result of their being mistaken for sex workers. Viewers were then introduced to Daniella, a former foster child who fought homelessness and an unfortunate sexual assault but overcame her tough situations and is now working with secured housing in New York City. The subjects featured in the film have had to overcome numerous difficult issues some of which intersected at points in the film. Issues such as lack of safety and violence especially affect trans women of color.

The doc was informative and powerful, but I was left wanting more (in the best way possible). I was especially happy to see the number of people of color represented in the film. The format was somewhat reminiscent of MTV’s “True Life” series. I felt like I had just watched an extended version “True Life” but this time the amazing Laverne Cox was narrating with tid-bits on the trans community and jarring statistics to go along. The documentary was a palatable guide to a sect of the LGBT community that often gets unfairly stigmatized. Visibility, and simple story telling are crucial in breaking down those stigmas and misinformation about transgender people. In a recent interview with Elixher magazine, Cox had this to say about the doc and the brave subjects:

I hope it just humanizes them. There’s a little ‘Trans 101′ at the beginning. We have to educate people a little bit. When we’re truthful about our stories, it helps us connect as human beings. Hopefully through that connection we can break down some of the misconceptions. We’re not a monolith. These young people represent some of the diversity in the trans community.

If you missed the doc, no worries, you can watch it, in its entirety below.