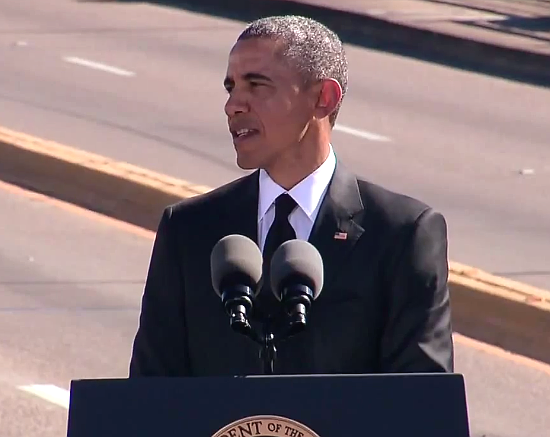 Over the weekend, President Obama delivered an inspiring speech to commemorate the 50th anniversary of “Bloody Sunday.”

On March 7, 1965, approximately 600 protestors, led by John Lewis of SNCC, marched heading east out of Selma on Highway 80. The march went according to plan until the protestors tried to cross Edmund Pettus Bridge, where they were blocked by a wall of state troopers. The officers began shoving and pushing protestors, what followed was a series of brutal assaults, and attacks, leaving seventeen marchers hospitalized. Images of the brutality rapidly spread, and the attacks were condemned by President Johnson.

Over the weekend, the President, joined Representative John Lewis, as well 100 congress members, to lead a group of nearly 70,000 across Pettus Bridge to commemorate Bloody Sunday. The President also delivered an inspired speech before the crowd.

It is a rare honor in this life to follow one of your heroes. And John Lewis is one of my heroes.

Now, I have to imagine that when a younger John Lewis woke up that morning fifty years ago and made his way to Brown Chapel, heroics were not on his mind. A day like this was not on his mind. Young folks with bedrolls and backpacks were milling about. Veterans of the movement trained newcomers in the tactics of non-violence; the right way to protect yourself when attacked. A doctor described what tear gas does to the body, while marchers scribbled down instructions for contacting their loved ones. The air was thick with doubt, anticipation, and fear. They comforted themselves with the final verse of the final hymn they sung:
No matter what may be the test, God will take care of you;
Lean, weary one, upon His breast, God will take care of you.
Then, his knapsack stocked with an apple, a toothbrush, a book on government – all you need for a night behind bars – John Lewis led them out of the church on a mission to change America.

There are places, and moments in America where this nation’s destiny has been decided. Many are sites of war – Concord and Lexington, Appomattox and Gettysburg. Others are sites that symbolize the daring of America’s character – Independence Hall and Seneca Falls, Kitty Hawk and Cape Canaveral.

Selma is such a place.

In one afternoon fifty years ago, so much of our turbulent history – the stain of slavery and anguish of civil war; the yoke of segregation and tyranny of Jim Crow; the death of four little girls in Birmingham, and the dream of a Baptist preacher – met on this bridge.
It was not a clash of armies, but a clash of wills; a contest to determine the meaning of America.

And because of men and women like John Lewis, Joseph Lowery, Hosea Williams, Amelia Boynton, Diane Nash, Ralph Abernathy, C.T. Vivian, Andrew Young, Fred Shuttlesworth, Dr. King, and so many more, the idea of a just America, a fair America, an inclusive America, a generous America – that idea ultimately triumphed.

As is true across the landscape of American history, we cannot examine this moment in isolation. The march on Selma was part of a broader campaign that spanned generations; the leaders that day part of a long line of heroes.

We gather here to celebrate them. We gather here to honor the courage of ordinary Americans willing to endure billy clubs and the chastening rod; tear gas and the trampling hoof; men and women who despite the gush of blood and splintered bone would stay true to their North Star and keep marching toward justice.

They did as Scripture instructed: “Rejoice in hope, be patient in tribulation, be constant in prayer.” And in the days to come, they went back again and again. When the trumpet call sounded for more to join, the people came – black and white, young and old, Christian and Jew, waving the American flag and singing the same anthems full of faith and hope. A white newsman, Bill Plante, who covered the marches then and who is with us here today, quipped that the growing number of white people lowered the quality of the singing. To those who marched, though, those old gospel songs must have never sounded so sweet.

In time, their chorus would reach President Johnson. And he would send them protection, echoing their call for the nation and the world to hear: