Why Are Most of the Artists Representing Kenya in the Venice Bienniale Chinese? 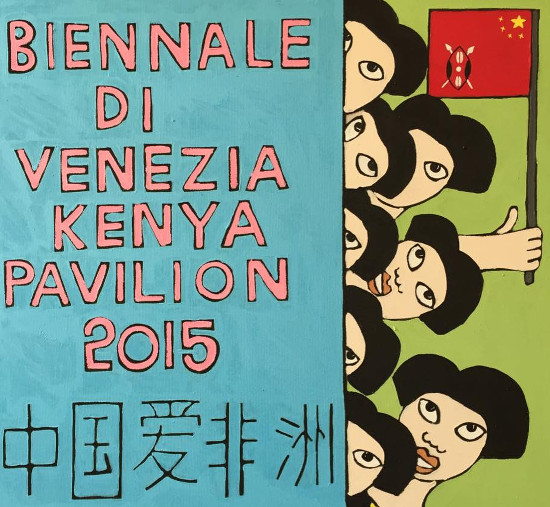 In May of this year, the Venice Bienniale, one of the oldest and most respected international arts events will return to Venice for the 56th time. The event, which in many ways, is the “Olympics of the fine art world,” will feature the work of 136 artists from all over the world, 21 of which are African. This year’s Bienniale is curated by Okwui Enwezor, a Nigerian-born curator, critic, editor, writer, who also Director of the Haus der Kunst in Munich. Enwezor is also the first African to curate the event.


The roster of countries that artists showing at the Venice Bienniale hail from changes every year. Only 30 countries, including the United States, have a permanent spot at the event. Kenya, which is included in the group of additional nations, will show at the Biennial for the second time in the event’s history — but something seems off. This year’s Kenyan pavilion is being curated by two Italians, Paola Poponi and Sandro Orlandi Stagl, and only two out of the 12 artists showing are Kenyan-born. Yvonne Apiyo Braendle-Amolo, who is not based in the country, is the only artist showing in the group who has Kenyan ancestry.

The curious turnout at the pavilion has attracted the attention of many Kenyan artists and critics, and has even spurred a petition to the nation’s Ministry of Culture, requesting that the organization “Renounce Kenya’s fraudulent Representation at 56 Venice Biennial 2015 & commit to support the realisation of a national pavilion in 2017.”

Olabisi Silva, an arts educator and the founder and director of the Centre for Contemporary Art (CCA), Lagos, Nigeria, recently posted about her experiences at the 2013 Bienniale on Facebook,

..I was a member of the jury for the last VB in 2013 and really the Kenya Pavilion was shambolic. Full of chinese and italian artists with some kenya artist in a dark room. A monumental embarrassment to the country and to the continent that should not be allowed to happen again. It completely undermined and misrepresented the wonderful work that is coming out of the country. That it would happen again this year is totally frightening and that must not be allowed.

Kenyan artist Michael Soi also spoke out about the Bienniale. He recently posted a series of artworks titled, The Shame in Venice, and shared his thoughts on the matter with OkayAfrica,

The Shame In Venice is all about misrepresentation and fraud flying the red green and black of the Kenyan flag in a pavilion full of Chinese artists. For those who don’t know, Kenya has a lot of great contemporary artists who can represent Kenya at whatever level. Artists living in the diaspora and the local gang operating from Nairobi and other towns in Kenya. The likes of Wangechi Mutu, Naomi Wanjiku Gakunga and the local brigade with the likes of Peterson Kamwathi, Paul Onditi, Richard Kimathi, Jimmy Ogonga, Jim Chuchu, Emily, Beatrice, Miriam, Jackie……. We can go on and on…..that Kenyan pavilion is as phony as a 3 dollar bill.

He also attributed the situation to,

Misinformation, corruption and lack of information regarding the participation into the Biennale itself and crafty individuals who seem to have opted to have Chinese artist paying their way into the pavilion and of course, lack of government support towards having a proper Kenyan pavilion.

The situation in Venice is a microcosm of China’s complicated, neocolonialist, relationship with Kenya. Earlier this month, a Chinese restaurant in the country was shut down after reports began to circulate internationally that the restaurant had been turning away Kenyan diners.

The situation is also ironic, considering the theme of this year’s Bienniale — “All The World’s Futures.”

With the Venice Bienniale a little more than a month away, odds are not much can be done to change the Kenyan pavilion, but Kenyan artists are already organizing to make sure that history doesn’t repeat itself in 2017.