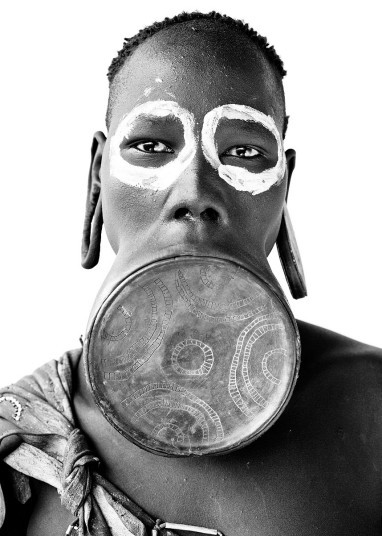 The following series was taken by photographer Matilda Temperley. The Omo Valley in southern Ethopia is a diverse area where many different tribes call home. The people of the Omo Valley have been studied extensively since Europeans first came upon the area in the 1880’s. Today the Omo Valley is quite a tourist attraction, so much so that the area’s economy is almost completely dependent on tourist dollars. The culture of the peoples living in the Omo Valley is slowly changing partially due to efforts by the Ethiopian government to “modernize” the area.


In this photo series Temperley focused on the lip plates worn by the Mursi and Suri tribes of the Omo Valley. The series also features one girl who, when originally photographed in 2009, did not want to have a lip plate, but eventually succumbed to peer pressure and had a plate inserted. Mursi women aged 13 to 18 are allowed to decide whether or not they want a lip plate. Lip plates are linked to a young woman’s marriageability, and they are generally inserted 6 to 12 months before a young woman is to be married. Lip plates are usually inserted by the young woman’s mother.