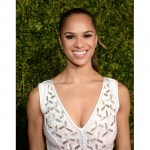 It looks like pioneering ballerina Misty Copeland will be adding TV producer to her long list of credits and accomplishments. Copeland, who is also the subject of a recently released documentary, will be co-producing a new TV series for FOX. She’ll be working alongside writer Tracy Oliver.


According the Deadline, the show, a scripted series, will center around a “young, hip and diverse” group of dancers fighting for a spot at a premier dance company. Copeland, who was recently appoint principal dancer at the American Ballet Theatre, will draw from her own experiences to create the series.

This isn’t Misty Copeland’s first foray on the small screen, last year, it was announced that she had a docu-series for the OXYGEN network in development.