13-Year-Old Programmer and Blogger Keila Banks Delivers an Inspiring Speech About Defining Yourself. 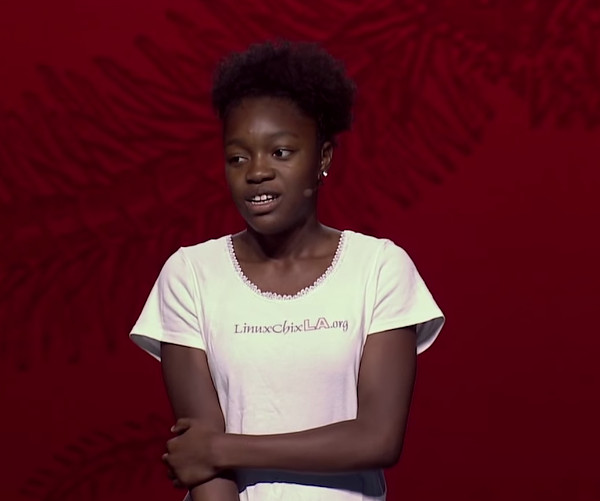 Keila Banks is a 13-year-old programmer and blogger from Los Angeles. She first became interested in tech after starting a blog at the age of 6. By the time she was 9, Keila was teaching herself to code, using a course on W3schools, along with books her father, who is an IT consultant, bought for her.


Keila is a skilled website coder, and is familiar with Python and Ruby, among other programming languages. She also creates videos using popular programming tool Machinima, and blogs at Woozworld (a virtual gaming world for tweens and pre-teens). Keila’s coding and social media services have even attracted a few clients, including L.A. mayor Eric Garcetti.

In 2013, Keila delivered her first speech about being a kid coder at the Southern California Linux Expo SCALE conference, which her father helps to organize.

“This is what society perceives about me — some common labels to the naked eye about what you think about me. I’m black, I’m a girl, I live in inner city Los Angeles, and I’m thirteen. There’s also a lot of negative labels that come with that. Like, I might be ‘sassy’ or I might be uneducated. Well, maybe by the end of this talk, some of the labels that you think of me will be different.”