73 of the Sexiest Black Female Scientists. 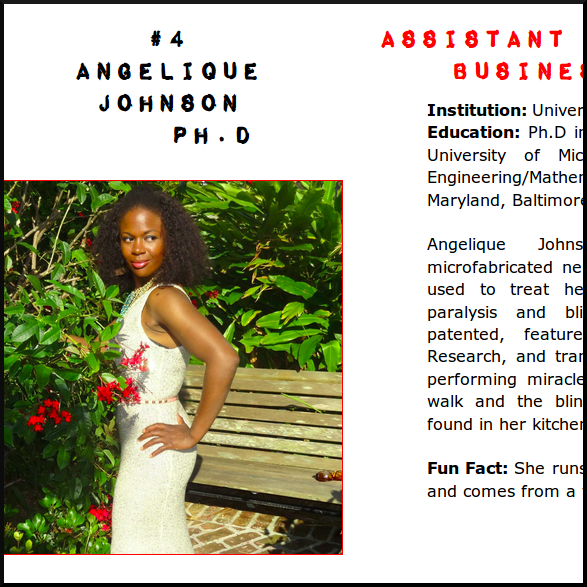 If that title, or the existence such a list gives you pause, consider it’s origins. Kyla McMullen, Ph.D, a fellow sexy black female scientist, compiled the list in response to a February 2013 Business Insider article featuring the “50 Sexiest Scientists Ever!“, which featured no black women.

Despite the magazine’s intentional or unintentional exclusion, the purpose of this article is to increase the visibility of Black female scientists and show the world that we do exist.
Being omitted in the Business Insider adds to the constant feelings of invisibility and isolation that are felt by many women of color in STEM fields. Furthermore, if I were a young Black girl looking at the Business Insider Article, I would unconsciously be receiving the not-so-subtle message that people who look like me do not excel in science. So why would I try a scientific career? *** The face of Science needs an extreme makeover. If the current generation is going to be engaged in scientific careers, we need to dispel the stereotypical image of a scientist as being a white, glasses wearing, socially-inept nerd. The Business Insiders went one step in this direction, but not far enough. This generation needs to see that being a scientist is not a death sentence to a life of awkwardness.

While black women being a majorly underrepresented group in STEM careers, the list definitely delivers. It features 73 beautiful, brainy black women from all backgrounds with a variety of hobbies and interests, ranging from Salsa dancers to children’s book authors to reality show contestants and NFL cheerleaders.