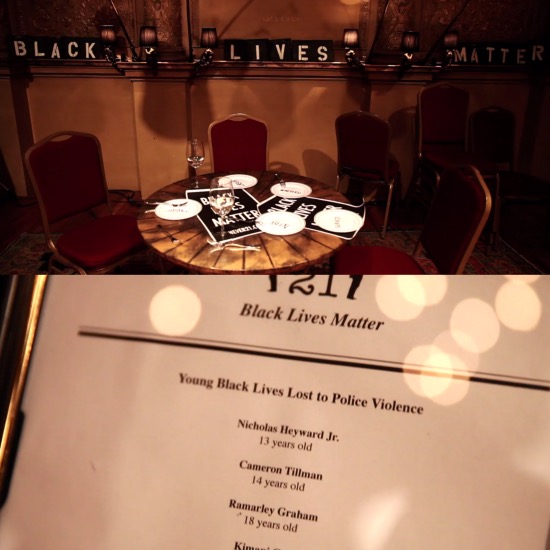 Never 21, the youth activist group which staged a viral protest at a Forever 21 store in New York City, decided to head uptown to the upscale 21 Club
restaurant. They carried out a stealth demonstration with two members of the group posing as waiters.

When the elite patrons of the restaurant opening their menus hoping to see the specials for the day, instead, it turned out that they had been provided with an alternate menu — which contained a list of the names of youth who had been killed by the police.

The stealth demonstration drew mixed reactions from the diners, who happened to be all white.

One patron tried, and failed to make a joke, while another threw the menu on the table after stating, “I’m not racist. I don’t need this.”

While customers and servers were distracted inside, another activist hung letters which spelled out “Black Lives Matter” on the restaurant’s iconic lawn jockeys.

The recent McKinney, Texas pool party incident serves as a prime example of what Never 21 has been and will continue fighting again. This was not intended to be an attack on the 21 Club itself. In contrary, it was an opportunity for the iconic cuisine to support a movement that needs all of the allies it can get.

Watch a short video of the demonstration: