Alek Wek Chats With The Guardian About Self-Confidence And Life in South Sudan. 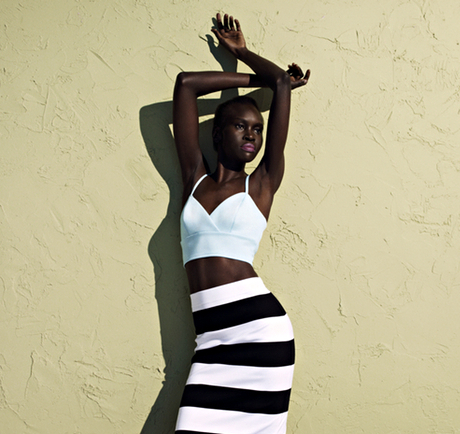 There’s an argument that this self-belief comes from growing up with what was effectively a media blackout. “Our confidence came from my mother,” she says (Alek, pronounced a-LEK, is one of nine children). “She told us it was about celebrating the beauty of being a woman – that’s what made you gorgeous.” Models hear more direct criticism of their appearance than anyone else, with casting agents, editors and photographers picking apart their features in front of them. “You can feel very strongly that someone doesn’t like you. I think any model who didn’t have the same sort of upbringing as me would find that very difficult. But I absolutely knew I was entitled. I never thought I was ugly – it never crossed my mind.”

From the start, it was high fashion and couture, not mainstream fashion, that most enthusiastically embraced Wek’s look. “High fashion were the brave ones,” she says. “When I started, I’d hear other people saying, ‘God, she’s so bizarre-looking’, because I didn’t look like the girl next door. But I was just normal. I was the girl next door. There were people in high fashion I could better relate to, who were doing something more interesting and not talking this sort of rubbish.”