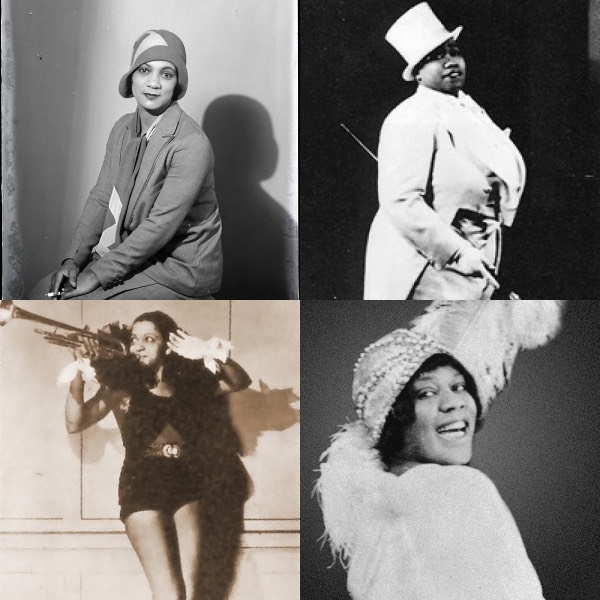 As an artist and a black queer woman, I always been inspired by the pride and creativity of the black artists of The Harlem Renaissance. However, many of those artists were also queer and could only express themselves at night, at blues and jazz nightclubs and at underground parties. Black queer women were oppressed on multiple levels — dealing with racism, sexism, and respectability politics from both whites and blacks.

One of the first black queer women whose story resonated with me was Bessie Smith. Known as “The Empress of The Blues”, she was a rough and tumble blues singer who drank hard, partied hard, and took both male and female lovers. According to the documentary T’ain’t Nobody’s Bizness, she was quoted during a lover’s spat with a female dancer as saying, “I’ve got twelve women on this show and I can have one every night if I want it.”

Recently, Bessie’s story was brought to life in the 2015 biopic Bessie. Directed by Dee Rees and starring Queen Latifah, the film did a fantastic job of showing Bessie’s bisexuality without making it the focus of the film. It showed that Bessie lived for herself and for working class blacks while singing the blues. Since black queer people often have their blackness and queerness treated as mutually exclusive identities, this film made a powerful statement.

Gladys Bentley was another black queer woman who intrigued me. During the Harlem Renaissance, she performed raunchy blues numbers in a tuxedo and top hat while flirting with women in the audience. Headlining the Harlem club known as “The Clam House,” she was one of the most popular attractions ever.

In addition to her performances, Bentley was also known for her public marriage to a white woman in 1931. While the rise of the McCarthy era forced her to renounce her queer identity to survive, her accomplishments as a queer black woman are still felt today. On her debut album Twilight For Gladys Bentley, black queer poet and musician Shirlette Ammons reimagines Bentley in modern times through the lens of hip-hop.

Although Bessie Smith and Gladys Bentley managed to carve out their own space in the United State, other black queer women found better success abroad in Europe. One of these women was Ada “Bricktop” Smith, who became known as “The Grand Dame of Paris” through her work at the nightclub Le Grand Duc and her own nightclub Chez Bricktop. Of Celtic and African ancestry, she considered herself “100 percent negro with an Irish temper.”

Known as much for her flaming red hair as she was for her business, Smith gained not only a nickname but also a good reputation. After financing Chez Bricktop by giving out dance lessons, her restaurant opened and became the hub for African American female artists. One of these artists included the dancer Josephine Baker, whom she had an affair with in her early career.

Valaida Snow was another musician who would also thrive in Europe, for a time. Snow was multi-talented performer who could sing, scat, dance, and play a variety of instruments. The instrument that she became most associated with was the trumpet. A pioneer for black women jazz instrumentalists, her trumpet playing earned her title of “The Queen of Trumpet And Song”. As a queer person, she managed to express her love of women by recording the song “Chloe,” on which she sang and played trumpet.

While Valaida Snow found greater popularity in Europe than in the United States, she wasn’t completely safe on the continent. In the early 1940’s, Valaida Snow was captured in Nazi-occupied Copenhagen while on a return trip to Denmark. As the conductor of an all-women’s jazz band, Snow was sent to a concentration camp not only because she was a black woman, but also because of her implied lesbian relationships with female German musicians.

Thankfully, Snow survived the camp and managed to be released as an exchange prisoner. Although people disputed her story of being in a concentration camp, she stuck to it and eventually found the strength to perform again. Despite being shaken physically and psychologically, she continued to perform until her death in 1956. Today, her resilient spirit and vivacious musical artistry remind me that black queer woman can endure almost anything.

Without Bessie Smith, there would be no Dee Rees. Without Gladys Bentley, there wouldn’t be Shirlette Ammons. By knowing that black queer women existed in the past, we can have a future. If black LGBTQ continue to acknowledge their history, then we can not only be black and queer, but also whole.