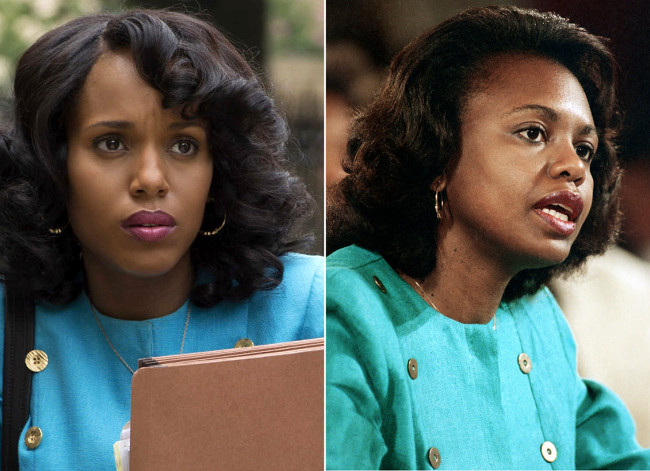 The first time I ever heard the name Anita Hill, I was about 8 years-old. I was sitting on the floor of the living room at my father’s feet, watching the late night news. He was leaning back — mouth open, snoring. I was up way past my bedtime, as was often the case when my mother worked nights at the hospital.

My young mind tried to make sense of what I was hearing. I struggled to retain the information as best I could. At that age I frequently read the newspaper and watched the evening news as a way to connect to my often stoic, conservative, West Indian father. This habit resulted in a robust vocabulary and a slightly unhealthy cynicism of the world around me. Though, as a member of the only black family on the block at a time when racial tensions in New York City were at an all time high, I already knew far too much about how the world around me really worked.

I couldn’t quite define my feelings about Anita Hill, but I knew that something was wrong. I knew that every time I passed a newsstand with yet another newspaper with yet another salacious headline, that Anita Hill’s story was being twisted more and more. At the time I didn’t realize it, but I was receiving a crash course in what is to be black and female in America.

Over the years, I’ve revisited Anita Hill’s testimony against Clarence Thomas on multiple occasions. Every time I’m brought to a new understanding, but each reading is also deeply painful. Throughout my life and my career, I’ve had what can best be described as “Anita Hill Moments.” I’ve experienced sexual harassment at work. I’ve had moments where I’ve felt that my race and gender were compartmentalized by others to fit their needs, while I was left to make sense of complicated feelings that only other black women could empathize with.

In the weeks prior to the premier of Confirmation, the HBO film starring Kerry Washington at Anita Hill, I started to wonder if modern discourse around race and gender would inform the case. Could it, at the very least, have altered the way that we talk about it? What we be saying on Twitter? What articles would we be sharing on Facebook? What would Anita Hill look like in the age of social media?

To imagine Anita Hill “taking place” in modern day, is essentially creating a stitch in time. Her experience played a major part in shaping contemporary black feminism. Her testimony changed the way that we talk about sexual harassment, and made many women feel empowered to talk about it at all.

But despite gains made by feminist groups and women from all backgrounds, Anita Hill was still vilified in many spaces. Her career was still threatened. We are still looking at political system that has only seen one black woman in the United States Senate — ever.

If social media existed back then, or the hearing took place today would we see a different outcome? Would the pain and triggers experienced by many black women in the wake of this case be dulled by certain safe spaces? Or, would that pain be exacerbated by clickbait articles and misogynistic trolls? Would Clarence Thomas’ political career as we know it be completely obliterated?

Even though the general public would have access to more information, I’m imagining that certain key details would be largely left out, in lieu of salacious quotes, when discussing Hill’s testimony on many popular political blogs. Certain mainstream online media spaces would take a superficial reading of the case, or would likely appropriate the work of black feminist writers, barely crediting them. I can imagine many liberal publications being more invested in condemning Clarence Thomas for being a black conservative than protecting and supporting Anita Hill.

Today’s Bill Cosby supporters would also be Anita Hill detractors. Much like Cosby, Thomas represents a warped form of black patriarchy that sits atop a shaky pedestal of respectability politics and is informed by conservatism. There would be so many heated discussions in 140 characters or less. I can also imagine which black celebrities would become a trending topic after posting messages of support for Clarence Thomas. Crass comments and quotes from conservative politicians would be amplified. There would be a sea of deleted tweets and faux apologies.

I would probably end up blocking people on Facebook for sharing bizarre, conspiracy theory laden posts and sloppy nonsensical memes about sexual harassment.

Rare, but poignant discussions about colorism, would also take place, but the most thoughtful conversations would be overshadowed and pushed to the margins.

If Anita Hill had “happened” in the age of social media, the most important conversations that were already taking place would reach even more people. So many more of us would be armed with a vocabulary to describe just what we were seeing, hearing, and feeling. We would have a better understanding of the system behind all of it.

The viewpoints would also be more diverse. The impact would be even greater. But, the same power dynamics and the system that vilified her would still be in place. In the long run, the outcome would be the same.