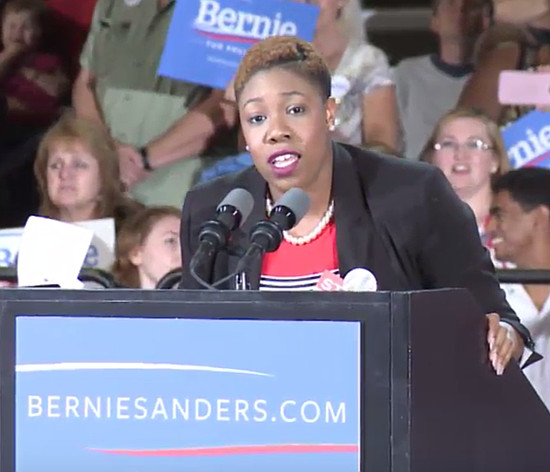 
Sanders, a graduate of Creighton University, with an impressive background in communications for various social justice organizations, introduced Bernie Sanders to supporters in Seattle, on Saturday.

Sanders is also a volunteer organizer with the D.C.-based Coalition for Juvenile Justice.

As national press secretary, she is in the unique position of defending Bernie Sanders, but also making sure that her candidate understands the concerns and needs of black activists. Over the past few weeks, she has been advising the senator from Vermont on how to best understand and form a dialogue with the Black Lives Matter movement.

The Sanders campaign has been careful not to outright condemn the interruption in Seattle by two Black Lives Matter protestors. While Bernie Sanders released a statement expressing disappointment in the situation, Symone D. Sanders expressed understanding. She had this to say, after the rally:

“Do I think everyone in the movement agrees with the way the protesters commanded the stage today? No. Am I going to condemn the protesters for standing up and expressing themselves? No. Because their voices matter.”