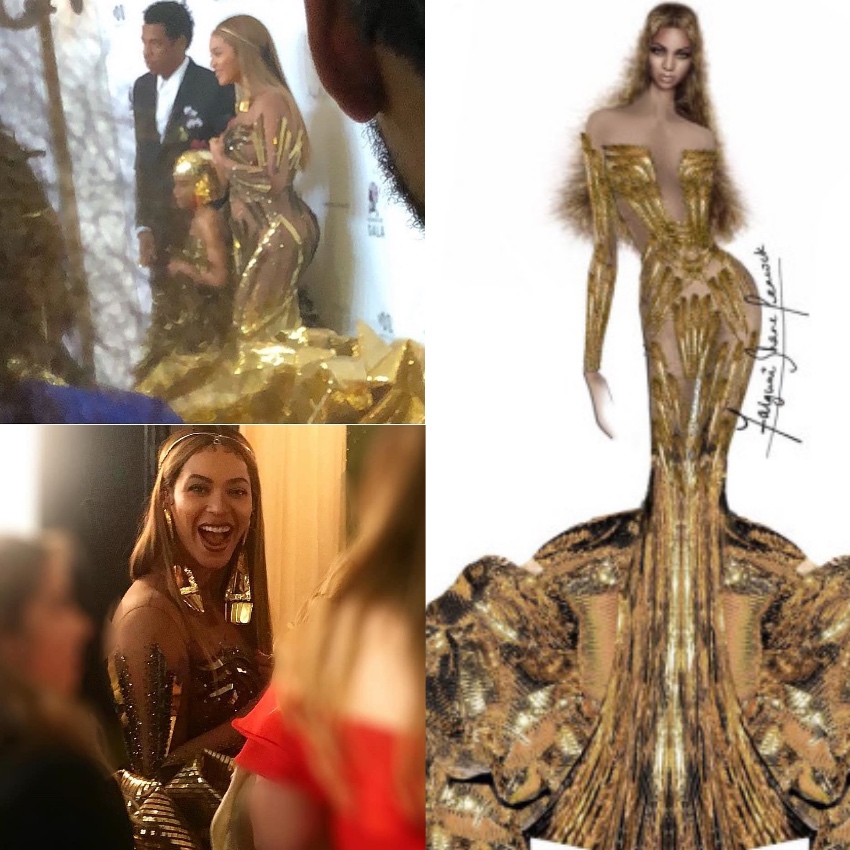 Beyoncé stole the show in a golden custom gown by Falguni Shane Peacock to this year’s Wearable Art Gala, hosted by Tina Lawson.

The unique dress was created to fit with the theme of the night — “Waco to Wakanda.”

“We wanted to create an art statement, taking inspiration from the Nubian warrior queen [Amanishakheto],” said designers Falguni and Shane Peacock. “We felt it was the perfect inspiration when designing for such a strong woman like Beyoncé.”

“The metallic cutouts are placed strategically to mimic the shape of armor, as worn by the Nubian armies. The elaborate gold train was added to create a 3-D effect that emphasized royalty. Between the metallic cutouts to the gold dramatic train, we attained an artistic statement while respecting the Nubian inspiration.”

At one point in the evening, Beyoncé changed into a another look — a silky asymmetric dress with gold detailing by Jean-Louis Sabaji.

She accessorized her look with a custom metal headband by Uniquely Wired.

First off I need to Give thanks to this Collaboration with @mmanuelamendez for making this happen. We planned this for Blue Ivy, but So grateful Bey loved it and Rocked it. When you work hard to watch your dreams come true. Imma leave this right here for a min. Yes Thats The Queen @beyonce Adorned in a custom Gold Halo Band. Handcrafted by yours truly @uniquelywiredm . Grateful for this Moment. Beyonce wore a custom Gold wired Halo headband (originally made for Blue) by @uniquelywiredm to the #WearableArtGala 2018 That became the story of my life yesterday. So honored and grateful for everything that's aligning for me right now and whats to come. Thank you for all those who showed support for my work , my family , my brand.Im so grateful PS just getting started more to come #beyonce #uniquelywiredm #wacotowankanda #wearartlives #wearable #Art #wacotowankanda #yousawitherefirst