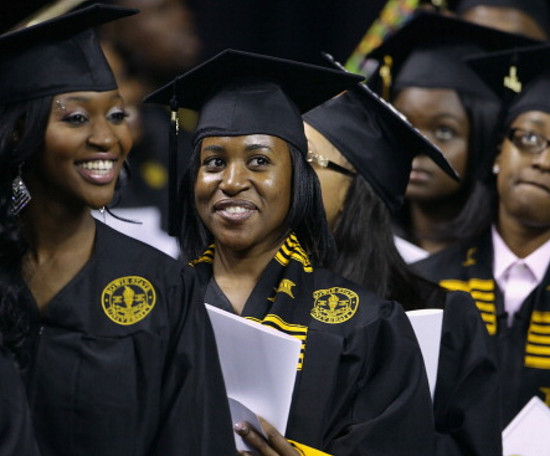 Graduates of Bowie State University arrive for the school’s graduation ceremony at the Comcast Center on the campus of the University of Maryland May 17, 2013 in College Park, Maryland. First lady Michelle Obama delivered the commencement speech for the 600 graduates of Maryland’s oldest historically black university and one of the ten oldest in the country. (Photo by Chip Somodevilla/Getty Images)


According to a report by the National Center for Education Statistics Black women are one of the most educated groups in the United States. The report looks at number of degrees earned by different groups, categorized by sex and race, over a specific period of time.

While this is of course amazing news, black women still have a long way to go in terms of pay equality. Black women still make up only 8% of private sector jobs, and hold only 2% of leadership positions.

Additionally, as of 2013, Black women earn 64 cents to a white man’s dollar, compared with white women who earned 78 cents, and Black men, who earn 75 cents.