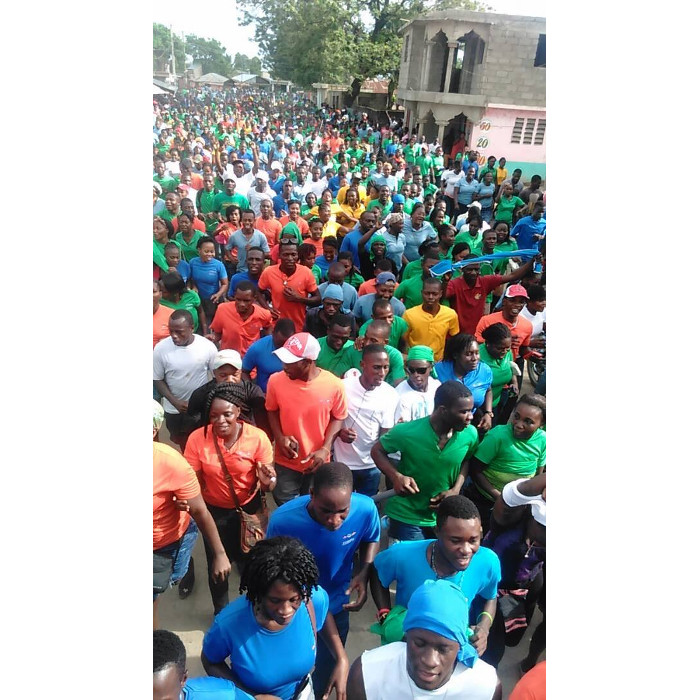 Garment workers in the northeast in Oaniminthe, image via Rapid Response Network

An ongoing strike, led by garment workers in Haiti, is now in its third week.

The group’s core demands include a minimum wage of 800 gourde (approximately $12.60 per day, an increase from roughly $5.50 per day), safer worker conditions, and access to social services.

While the protests were concentrated in the Haitian capital city of Port-au-Prince, Batay Ouvriye, an independent workers’ group which organized the growing movement, helped spread the message to workers across the country. Garment workers in the main cities of Carrefour, Ouanaminthe and Caracol are also part of the strike.

Since the strike launched last month, garment workers have shut down multiple factories across the country and have even blocked access roads leading the Haiti’s Toussaint Louverture International Airport. Despite being beaten and teargassed by riot police and threatened with violence, the striking garment workers continue to hold strong.

“It’s gotten to the point where I can’t take care of my son. I don’t see any future in this,” said Esperancia Mernavil, a garment worker who is part of the Gosttra union, told the AP.

Social Affairs and Work Minister Roosevelt Bellevue said that the government planned to sit down with reps for both the garment workers and factories, but he was reluctant to assure a raise in wages.

“We have to be competitive with other places,” he said.

Gildan, a billion-dollar clothing company based in Canada, is one of the main manufacturers named in the ongoing protests. Gildan manufactures garments for brands like American Apparel, New Balance, and Anvil, and has been called out for exploiting Haitian workers in the past. Notes from a 2011 investigation by the Worker’s Rights Consortium (WRC) cited Genesis, S.A. a factory that produces for Gildan, for violating labor rights. The WRC also stressed that Haitian garment workers “receive the lowest wages in the hemisphere and face some of the harshest working conditions anywhere in the global apparel industry.” In 2013 Gildan vowed to raise daily wages for Haitian Garment workers, to $7.22 per day, and to offer better working conditions. The new wages still meant that Haitian workers were the lowest paid in the world, with only Bangladesh and Cambodia offering lower wages.

The Rapid Response Network, an advocacy group that helps workers organize, is urging supporters to contact Gildan and voice their opposition.

The United States government has also played a part in wage exploitation in Haiti.

According to memos obtained by WikiLeaks in 2008 and 2009, the U.S. State Department blocked a proposal for minimum wage increase in Haiti.

In 2008, when the Haitian Parliament started discussing doubling or tripling the daily minimum wage of 70 Haitian gourdes to keep up with inflation, roughly amounting to US$1.75 a day or about 22 cents per hour, the WikiLeaks cables showed that U.S. Embassy officials started monitoring the minimum wage during the same period.

The memos show that U.S. embassy officials in Haiti opposed the wage hike and met multiple times with factory owners who lobbied against it to the Haitian president.

In 2011, nearly 2,000 WikiLeaks cables made available to The Nation and Haiti Liberte, a weekly newspaper in Port-au-Prince, also concluded that the “U.S. Embassy in Haiti worked closely with factory owners contracted by Levi’s, Hanes and Fruit of the Loom to aggressively block a paltry minimum wage increase.”

The future of garment workers remains uncertain, and bleak considering history, but advocacy groups and labor unions won’t back down. Growing solidarity movements and international attention provide a bit of hope for this ongoing struggle.