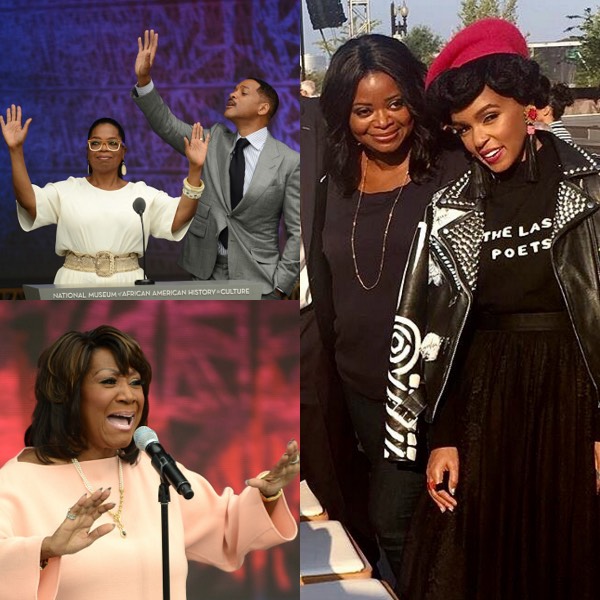 Washington, D.C. was the place to be this weekend, with the grand opening of the long-awaited Smithsonian National Museum of African American History and Culture.

While the event hosted many celebrities and special guests, visitors from all backgrounds, from all over the United States came to enjoy the museum and to take part in a historic moment.

“This is the place to understand how protest and love of country don’t merely coexist but inform each other. “

99-year-old Ruth Bonner, a daughter of a young slave who escaped to freedom, rings the Freedom Bell.

Vice President Joe Biden greets 99-year-old Ruth Bonner, a daughter of a young slave who escaped to freedom, as Dr. Jill Biden greets another generation of the Bonner family who rang the Freedom Bell with the President and First Lady to mark the official opening of the Smithsonian National Museum of African American History and Culture.

A performance by Ms. Patti LaBelle

A performance by Angélique Kidjo.

Ava DuVernay Debuts her short film August 28: A Day in the Life of a People.

Just after 3 p.m. Saturday, with no real announcement, a group of actors, movie makers and regular people just hanging around, hopped into the Oprah Winfrey Theater at the National Museum of African American History and Culture to see acclaimed director Ava DuVernay’s latest.

This man of the hour #CourtneyBVance and The Jordan family with me and baby sis @janellemonae. #ThePeoplesJourney

Previewing the @nmaahc. Beautiful and moving

Yesterday's look was an "Afro punked out Dorothy Dandridge from the future". Thanks for my Monáe pin curls @nikkinelms! And @jessicapsmalls!