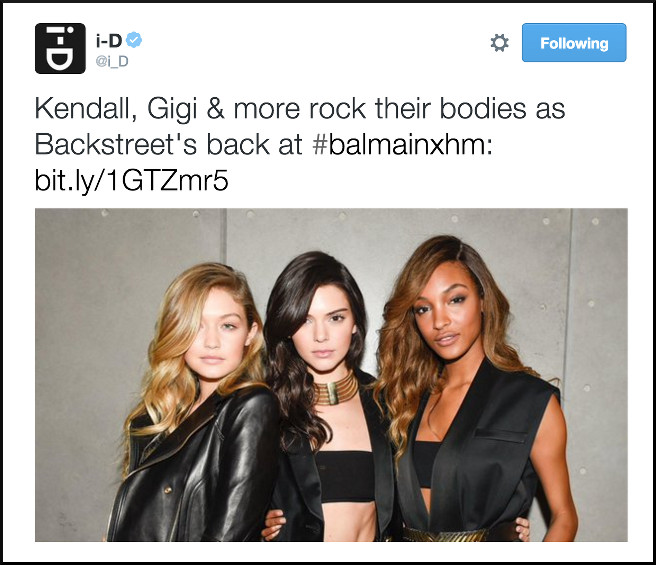 The tweet which includes an image pioneering black fashion model Jourdan Dunn, next to fellow catwalkers Kendall Jenner and Gigi Hadid, failed to name Dunn, instead referring to her as “more.”

The situation is pretty ironic on many levels. For starters, technically, Jourdan Dunn is the only bonafide model in this trio. Hadid and Jenner, while both beautiful women with considerable credits to their name, each came to fashion with backing from the strength of connections obtained their family names and Hollywood associations. Dunn, on the other hand was discovered the old-fashion way — while shopping as a teen at the British fast fashion depot Primark.

What’s even more ironic, is that Jourdan Dunn, who is a British fashion icon at this point, with a litany of covers and campaigns to her name, has appeared on the cover i-D a whopping 8 times.

Dunn also has quite an online fandom, and based on the replies that that infamous tweet, they definitely aren’t letting this slight go unnoticed.

i-D has and always will champion, 8-time cover star @missjourdandunn. The previous tweet was an oversight. https://t.co/jb30u47CXk