ICYMI. ‘Catfish’ Leaves Love Behind and Takes on Cyberbullying and Mental Health In a Pretty Cringe-y Episode. 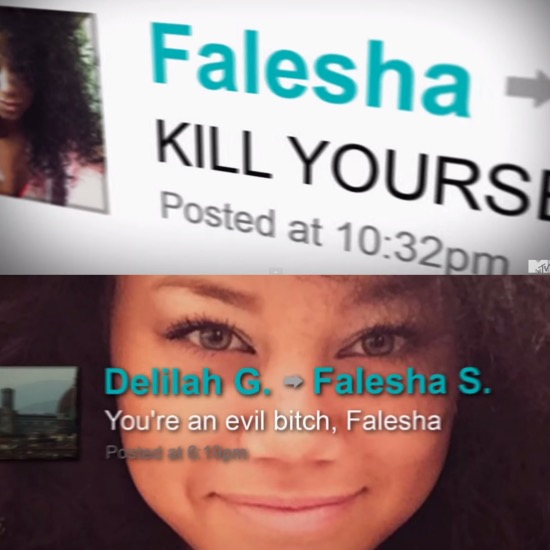 I haven’t been keeping up with MTV’s Catfish lately, but when I caught wind of this past week’s episode, I knew I had to tune in. I’m still not sure whether or not I regret that choice.


In this episode, we meet Falesha, a 19-year-old from the suburbs of Pittsburgh, Pennsylvania. Falesha’s not looking for love, she’s looking for the cyberbully who started harassing her when she was about fourteen. For years she endured cruel messages, and even phone calls from a Facebook user named “Jacqueline.”

Jacqueline, who used stolen photos of Falesha for the account, eventually changed her name to “Falesha” and assumed the real Falesha’s identity. The account even added the real Falesha’s actual friends and schoolmates, harassing them as well, by sending them insults and lewd messages, leading to a lot of confusion. Soon Falesha’s friends started avoiding her at school, and calling her a drama queen.

Falesha admitted that at the time, she felt deeply depressed. At one point, she was even suicidal.

Nev and Max leap into action with their elite brand of cyber-sleuthing and discover another group of kids that the fake “Falesha”/Jacqueline had been harassing. It turns out that one of the teens actually tricked the fake account into giving her the password to “Falesha’s” account, by catfishing the catfish. She used the info to discover the bully’s actual identity, and to disable to Facebook account. Soon after, the harassment died down — until recently.

Falesha received a message from “Jacqueline,” “Hey Bitch, Member Me!” It was then that she decided to reach out to Nev and Max to finally put an end to the years of harassment, once and for all.

Armed with new information, Nev and Max call Falesha’s harasser. The bully turns out to be a seemingly unbalanced woman named Tracey, who is around the same age as Falesha.

At this point, the entire saga takes a turn for the cringe. Tracey is… something — to say the least. Her interactions with Max, Nev, and Falesha allude to deeper issues that Catfish is definitely not equipped to handle. Falesha, manages to keep a cool head when she realizes what the group is dealing with.

That was when Falesha realized Tracey was psycho #Catfish pic.twitter.com/HIUxMWEcdo

Watch the entire episode below.