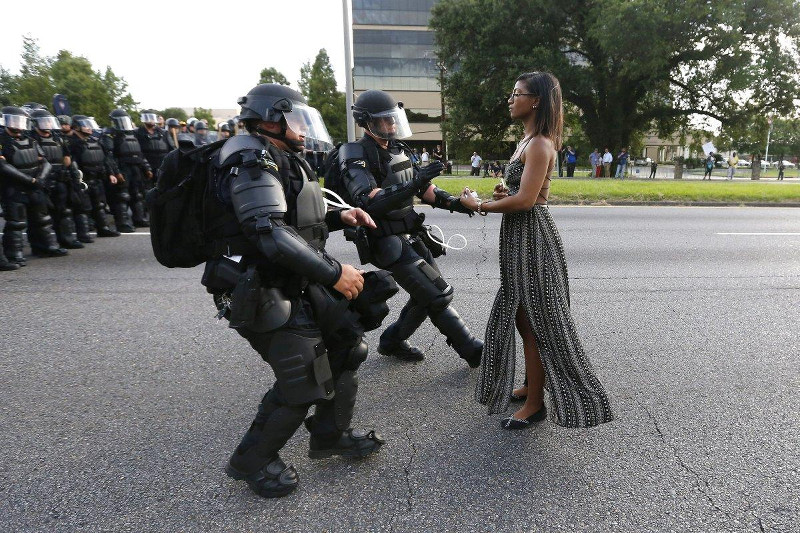 In the wake of recent protests against police brutality and the unjust killing of black Americans, Ieshia Evans has emerged as an iconic figure.

The above photo was taken by Louisiana-based photographer Jonathan Bachman, working for Reuters, over the weekend, during protests in Baton Rouge. Bachman snapped the photo just as Evans was being arrested for standing in the street.

“It happened quickly, but I could tell that she wasn’t going to move, and it seemed like she was making her stand,” Bachman tells The Atlantic. “To me it seemed like: You’re going to have to come and get me. And I just thought it seemed like this was a good place to get in position and make an image, just because she was there in her dress and you have two police officers in full riot gear.”

The jarring contrast between Evans and the officers has many calling the image a “Tiananmen Square Moment” in the protests.

Evans, who was taken into police custody and released after a night in jail, spoke out on Facebook.

“I just need you people to know,” she wrote. “I appreciate the well wishes and love, but this is the work of God. I am a vessel! Glory to the most high! I’m glad I’m alive and safe. And that there were no casualties that I have witnessed first hand.”

Evans, a 28-year-old nurse and mother of a five-year-old son, traveled to Louisiana from New York to take part in the protests.

According a friend, Natasha Haynes, Evans was “overcome with emotion” after hearing about the killing of Alton Sterling on television.

“I went into the street with my arms crossed and just stared at them. I guess they didn’t like it because they detained me,” Haynes says Evans told her.