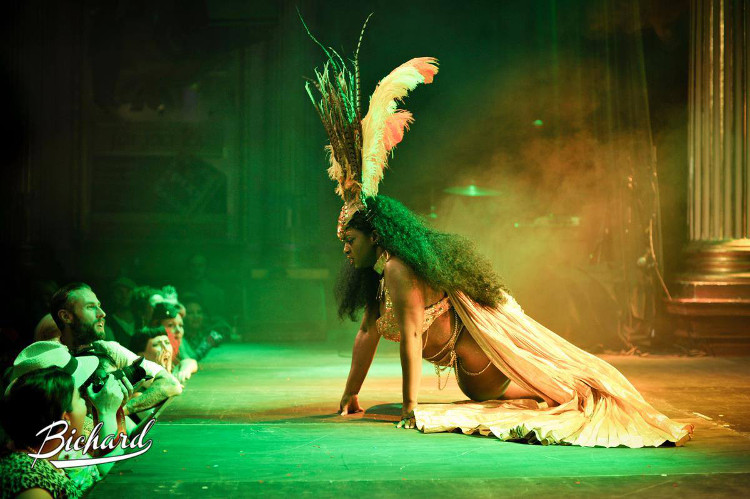 Akynos is a bold, beautiful, burlesque performer and curator based in Brooklyn, New York. She has curated shows and performed all over the world. Her latest project “THICK: A Zaftig Revue“, premieres tomorrow in New York.

Current Occupation(s).
Currently performance artist/curator; I’m getting back into writing on subjects of human rights and labor discrimination surrounding sex work. I am a licensed massage therapist and I make and sell my own body scrubs and massage oils. And I host lots of guests via Airbnb.

SS: How long have you been performing and curating shows?
A: For at least 5 yrs now. Off and on however, as producing is hard work esp without financial backing.

SS: What cities or venues other than New York have you performed in or curated shows in?
A:Negril, Jamaica, Stockholm, Sweden, Toronto, Canada, Ohio, Boston, Cleveland…so many.

SS: How did THICK come about? What inspired you to create it?

A: Thick is a new endeavor that I’ve been speaking about for 5 years. I see the way body types outside of popular culture seem to be vilified. The lack of diversity in body types in mainstream entertainment and even underground arts such as burlesque is deplorable. Talent, beauty, and intelligence comes in so many different forms. Why should all the slimmer bodies have all the fun? Why should myself and other performers who don’t fit into this structure of beauty be exempt from showing our talents? That’s what too many forms of entertainment do. 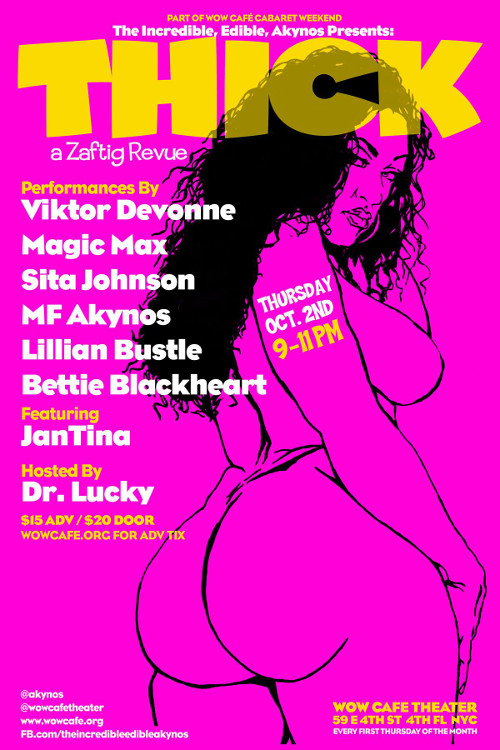 SS: Do you feel that Burlesque is inherently inclusive of women from different backgrounds or who have different body types?
A: It’s highly exclusive. When newbies enter scene, there are folk tales that the community is warm and welcoming. If you’re fat and also Black, good luck with being welcomed. Although more shows are being more inclusive, at least when it comes to color, things still remain the same; to be successful you should be thin and fair skin at the very least. Unless you’re the token Black or fat girl then you’re good to go. Otherwise all the tales of diversity is just for shits and giggles.

SS: How did you arrive at appreciating and advocating sex positivity?

A: I grew up a very sexualized female. I’ve always been shapely and over developed at an early age, so that meant unwanted male attention and jealousy and hate from females. I became a stripper when I was 17 and had my business in the sex work industry come under scrutiny by a man that was lucky enough to have me have his child and also by the court system. How unfair, when all I was trying to do was feed my children and pay bills and taxes.

So anyway, after I got that monkey off my back and became acquainted with the men and women who fight for the equal rights of all human beings to do what they damn well choose with their bodies, it was like getting bit by a bug. So anyone who comes near me needs to mind what they say about sex workers, sluts, and anyone who is free sexually.

And I’ve always been this person. I just didn’t truly have an outside voice on the issues til one day I just started not caring what anyone thought. Accordingly to a John Lennon song women are niggers of the world. Quadruple that when you’re Black.

A: Most of what I do has a political or hidden angry black woman message. For instance I wore cornrows in my performance for the burlesque festival show this past Friday. I’d read somewhere that mainstream fashion is now calling cornrows chic and edgy. As a Black woman, I desperately wanted to be chic and edgy like the white girls rocking cornrows on the runway so I just had to do it. 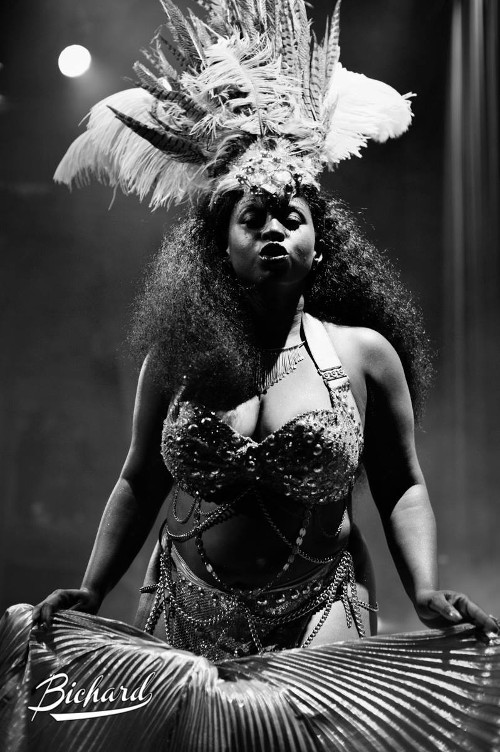 And when I do certain pieces like a shake dance or dance to particular songs, it’s all on purpose. Because on this performance scene the existence of other bodies of color and nationalities seems to be ignored. It’s as if Blacks and others of color are a mere inconvenience to this art form. So when I perform I’m usually thinking let me give them all my Black glory.

SS: Are you influenced by any performers of the past or present?
A: So many people inspire me. From Beyoncé to Angie Pontani. From Janet Jackson to Tina Turner. I’m inspired by so many of these entertainers that work hard and put out a top notch product.

SS: What are your absolute favorite singers/musicians to perform to?
A: I do a lot to Beyoncé. I breathe her. She is King. I am in love with her. But I want to have Rihanna’s children. I love both their energy and music.

SS: And lastly, Do you have any other shows, projects, upcoming performances, etc. that you would like to share with our readers?
A: In November I am curating a storytelling series called “Dark. Nude. Storytellers”. And it’s all about the oral history of women of color, and some other silly things in between. Yes it’s done in the nude. For 2015 I’m hoping to bring back my all Black revue Darkie which is an educational, theatrical revue about the Black experience. And finally I look to turn out the play based off Beyoncé’s music titled, Beyoncé Interrupted. Let’s see what happens, as the bodyscrubs and massage oil business is tough work.