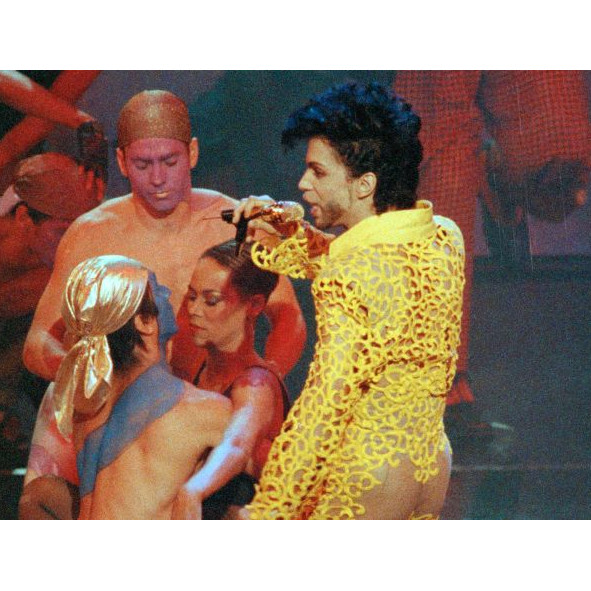 Prince caused quite a stir back in 1991 when he hit the stage at the MTV Music Awards. During a performance of his sensual hit “Gett Off,” the Purple One turned around to reveal butt revealing panels in the pants of his bright yellow suit.

The look was the talk of the awards and even inspired parodies on shows like In Living Color.

Years later, however, fabric dyer Marliss Jensen reveals that we actually saw much less of Prince than we originally thought.

Jensen, who runs Minneapolis-based Fabric Color Studio, worked for Prince for nearly a decade, starting back in 1985. She personally dyed the entire suit Prince wore during that infamous MTV performance — including a flesh colored “butt panel.”

“[M]any times I had to dye fabric the color of his flesh. They used it for linings of lace garments, pockets and things like that,” Jensen recently revealed to the Twin Cities Pioneer Press.

“And that yellow suit — his ‘butt suit’ — did not show his butt. That was fabric,” she added.

Samples of the flesh colored fabric are currently on display at “Commemorating His Purple Reign: A Textural Tribute to Prince,” an exhibtion which opened at the Joan Mondale Gallery of Minneapolis’ Textile Center earlier this month.

The exhibition also features the work of 24 quilters from around the country, including members of the Women of Color Quilting Network.