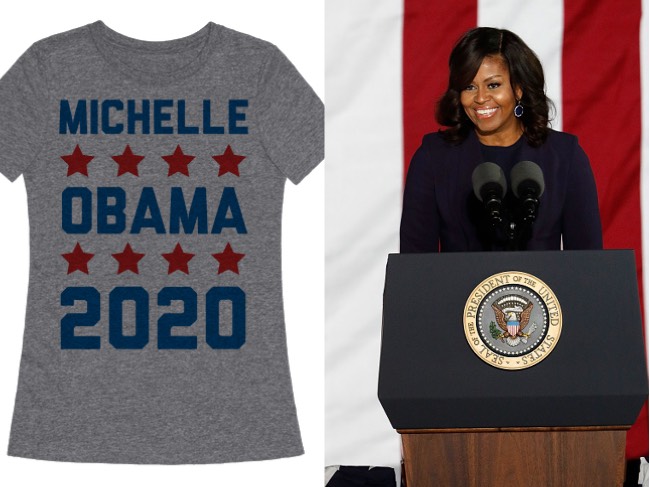 After some pretty devastating (for many) election results, Michelle Obama started trending, with many social media users even imploring the First Lady to “save us.”

The push for a Michelle Obama 2020 presidential run isn’t exactly new. Obama surged in popularity over the past few months after she delivered a series of impassioned speeches in support of Hillary Clinton. Throughout her husband’s presidency, fans and followers of the First Lady have speculated whether or not she would follow in the footsteps of Clinton.

“I will not run for president,” Obama said back in March, when asked about a possible run by Missy Elliott on stage at SXSW. “One of the reasons is that I’ve got these two young people at home. Being the daughters of a president, just think about it, not so easy. They handled it with grace and poise, but enough is enough.”

The push for Michelle Obama to run for president conveniently ignores the vitriol and hatred that she has experienced over the years from both the media and President Obama’s detractors.

For years she saw her words twisted, her appearance mocked, and her daughters verbally degraded. And, odds are, there are many more attacks that Obama and daughters Sasha and Malia endured that never hit the mainstream press.

“Michelle Obama 2020” seems to exist in a vacuum devoid of the reality of how black women are actually treated and perceived in this country. It’s also yet another example of the modern “mammy” dynamic that demands selfless labor from black women by presenting it as power. “Olivia Pope” was also trending on Tuesday night, this isn’t a coincidence.

President Obama also echoed his wife’s sentiments about running for office last month on the radio show “Sway in the Morning.”

“She is as talented and brilliant a person as there is, and I could not be prouder of her,” he said. “But Michelle does not have the patience or the inclination to actually be a candidate herself.”

A few days prior the President even joked that Michelle Obama would “divorce” him if he ever ran for office again.

President Obama has frequently repeated his wife’s vehement opposition to running for president on many, many occasions over the years.

“There are three things that are certain in life: death, taxes, and Michelle is not running for president,” he said at a town hall in Louisiana back in January. “That I can tell you.”

The ongoing push for a Michelle Obama presidency is also also eerily similar to the social media push imploring Jessica Williams to host The Daily Show following Jon Stewart’s departure. Despite the fact that Williams maintained that she wasn’t qualified for the position, “supporters” insisted on campaigning for her to take on the hosting gig. Things came to a head when a writer for The Billfold wrote an essay claiming that Williams was a “victim of imposter syndrome,” who merely needed to “Lean In™.” Williams responded by calling the piece “really insulting.” She also decided to take a social media break. Much like Obama, Williams’ true desires and agency were completely ignored. It seems as if “support” for both of these talented women involved minimizing the important work that they’ve already done and continue to do.

For the past 8 years, Michelle Obama has been a tireless advocate for children’s health and the education for girls. She also bought a particular grace and stylish flair to the White House. Watching her come into her own during this election has been truly inspiration, despite the outcome. Michelle Obama’s words and her work will leave an indelible mark on generations of women and that is worth more than any presidential run.