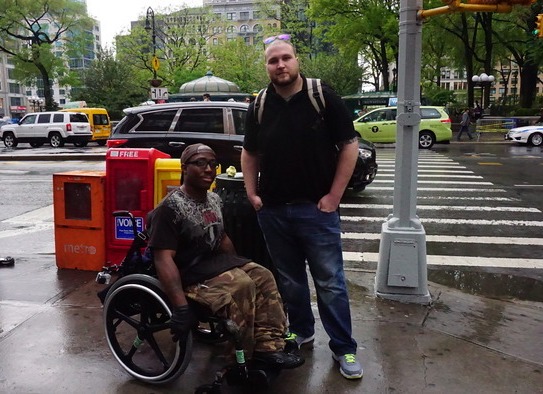 Every day, millions of people travel through New York City using public transportation, and for over 500,000 New Yorkers, accessibility is very important.


Wheely, a new app,developed by Anthony Driscoll aims to help wheelchair users as well as those with strollers. As only 18% of Subway stations in NYC have accessible elevators, apps like Wheely are definitely important.

According the app’s Kickstarter page,

My father was diagnosed with MS in 2001 and over the past couple years he has been dependent on a power chair to get around. We have traveled all over the country together and have experienced all levels of accessibility. Upon moving to NYC to attend grad school at Parsons School of Design my family would visit frequently. It took a lot of preparation and research to accommodate my father’s needs. We would have to call ahead to restaurants and figure out the best way for him to get from place to place. Though all of NYC’s buses are accessible, they are slow and can be a hassle to board and exit the bus. We decided to use the subway system since that is what I was most familiar with. It took us a few times traveling the subway to realize the right way to board the train and which lines were accessible. The MTA subway is hard to decifer when looking for accessible stations and sometimes the elevators are out of service which left us stranded. I saw a gap in the market for a visualized accessible subway map and elevator statuses and decided to create Wheely.

Watch this video below for a little bit more info. This project is already fully funded, so hopefully we’ll be seeing able to download Wheely in the near future.