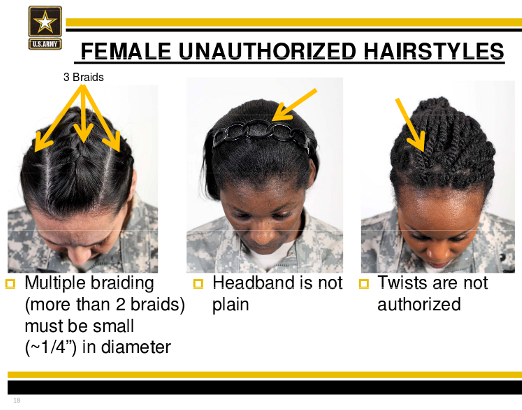 After months of criticism and debate and a petition which attracted thousands of signatures, the Pentagon has released a statement regarding new regulations for the hair of female soldiers. The new rules account for black natural hairstyles. The previous set of rules, which were included in a military handbook complete with images, demonstrated an acceptance of straightened hair, wigs, weaves and other expensive, labor-intensive styles for female soldiers. Natural hairstyles such as two-strand twists were deemed “unauthorized”.


According to USA Today,

Dreadlocks, cornrows, twisted braids and other hairstyles popular among African-American women will be more accepted across the military after a review of hairstyle policies prompted several changes, Defense Secretary Chuck Hagel said.

The three-month review came after a spate of complaints that service-level grooming policies were racially biased against black women who choose to wear their hair naturally curly rather than use heat or chemicals to straighten it.

“Each service reviewed its hairstyle policies to ensure standards are fair and respectful while also meeting military requirements,” Hagel wrote in a letter to lawmakers on Capitol Hill notifying them of the changes Monday. “These reviews were informed by a panel of military personnel of mixed demographics reflective of our diverse force.”

The review concluded that the terms “matted and unkempt,” which the Army and Air Force used to describe some dreadlocks and braids, are “offensive” and were removed from service grooming policies, Hagel said.