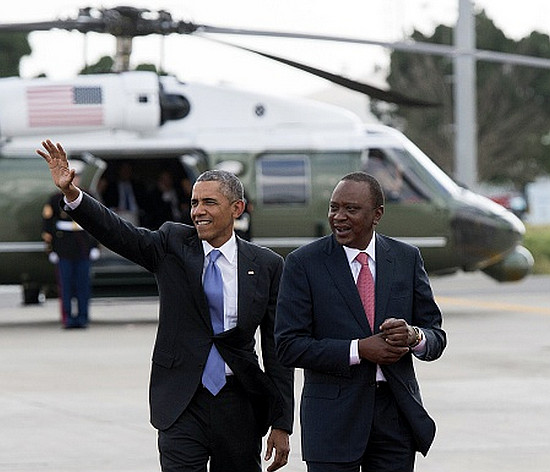 As the first sitting president to travel to East Africa, President Obama’s trip to Kenya and Ethiopia has been an eventful one. From visiting family and partaking in local culture, to meeting with political leaders, the President has had the opportunity to take a multifaceted look at the social and political climate in Kenya. Over the weekend, the president,

President Obama enjoyed the sounds of Kenyan band Sauti Sol at a state dinner in Nairobi. At one point her danced the Lipala, a traditional dance that got a popularized contemporary update thanks to Sauti Sol.

“I suspect that some, of my critics back home are, suggesting that I’m back here to look for my birth certificate.”

Reunited with his half-sister.

Obama Reunites With Half-Sister In Kenya

“As an African-American in the United States, I am painfully aware of the history of what happens when people are treated differently under the law,” Obama said during a joint press conference. “I’m unequivocal on this.”

Kenyatta responded that LGTBQ rights were simply not a priority for the nation,

“For Kenyans today, the issue of gay rights is really a non-issue. We want to focus on other areas that are day-to-day living for our people.”

Addressed the ongoing issue of counter-terrorism in East Africa.

Was greeted with a bouquet of flowers by Joan Wamaitha, an 8-year-old orphan.

Moment of glory for girl with bright flowers and sharp mind

At the Global Entrepreneurship Summit co-hosted by U.S. President Barack Obama in Kenya this weekend, IBM (NYSE: IBM) announced a new innovation and collaboration space at iHub – the heart of Nairobi’s tech community.