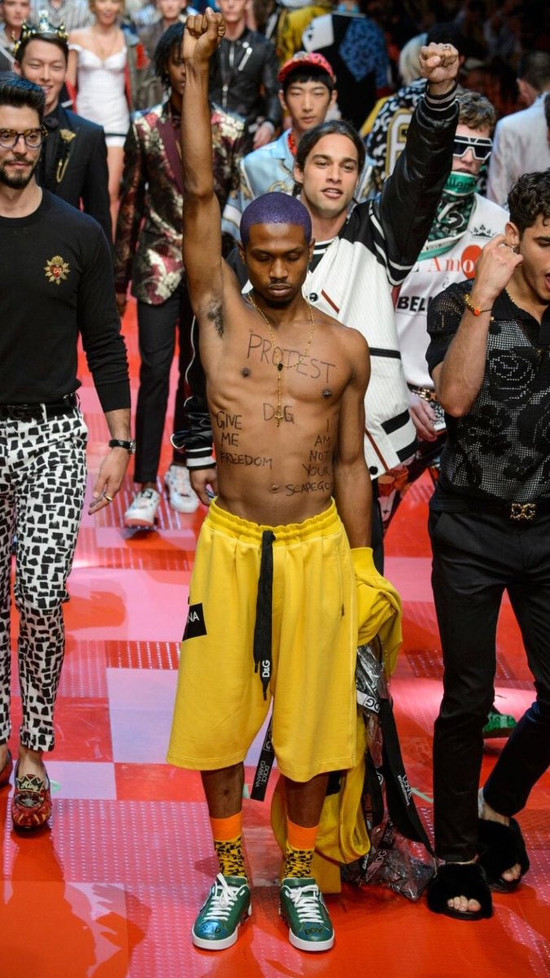 Like past shows, Dolce & Gabbana’s Spring 2018 Menswear runway in Milan was chock full of celebrity children, socialites, and rising talents. Raury, an indie artist and Afropunk favorite, stood out among the crowd after he staged a protest on the runway during the show’s closing walk.

The 21-year-old artist, who modeled a yellow hoodie and shorts both by Dolce & Gabbana, took off his top to reveal words of protest – “PROTEST and DG GIVE ME FREEDOM and I AM NOT YOUR SCAPEGOAT” — scrawled across his chest. He stood defiantly, with a single fist in the air, as models continued to walk around him.

Here's the video of him on the runway pic.twitter.com/C0HTYLY2ty

Raury’s protest was aimed at Dolce & Gabbana’s decision to dress Melania Trump, despite the fact that several brands have outright refused to dress the First Lady or simply declined to comment on the matter entirely. When Trump sported a $51,000 Dolce & Gabbana jacket covered in silk flowers, during an official visit to Sicily last month, the brand was heavily criticized.

Dolce & Gabbana shot back last week by offering a $245.00 “#BOYCOTT DOLCE & GABBANA” t-shirt. The Italian fashion house even staged a mock demonstration. While the response was mostly met with eyerolls, Miley Cyrus, whose brother Braison walked the same Spring 2018 as Raury, criticized the brand’s political stance, setting off a heated exchange. The digital tiff came to a head when Stefano Gabbana vowed to never have Braison Cyrus walk in another Dolce & Gabbana show.

Raury is the latest public figure to openly criticize Dolce & Gabbana’s politics. The singer says that he was initially unaware of the Trump controversy until he Googled the brand after arriving in Milan for the show.

Raury described what happened right after that moment on the runway:

So when I walked out of there, I made a beeline to the exit and a security guard wrapped me up. I juked his dumb ass but got stopped at the door. I kept saying, “Don’t touch me. Don’t touch me. The only person I will talk to is my manager, Che.” Che brought me my clothes—I took off all of the Dolce & Gabbana clothes I was wearing and tried to leave. They tried to stop us. They were trying to keep me in there. Why? I’m not stealing anything from you guys, you have everything you gave me. But they had, like, a bar of security in front of the door. I had to run, like, 300 feet up and away from them.

Raury also called out Dolce for exploiting young people and warned other brands.

“If your message is cool, then it’s cool,” he said. But if it ain’t, millennials are going to come and let you know. And we won’t let up.”