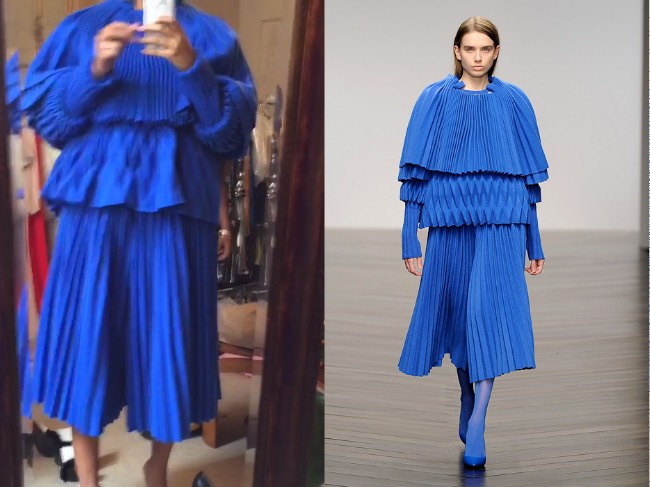 Solange recently posted a short video featuring the above dress, to her instagram account, “I die every time I get my period” #MetBall day commentary….
Shout out to Jaimee McKenna.

The dress comes from designer Jaimee McKenna’s Autumn/Winter 2013 collection. The wool, pleated dress comes in a unique shade of blue, that according to Dezeen, “was inspired by an ultramarine shade first mixed by post-war French artist Yves Klein.”

Fans have already been pleading with Solange not to wear this particularly avant-garde look, on both Facebook and Instagram. Some have said she looks like a clown, while others have compared her to Veruca Salt from Willy Wonka & the Chocolate Factory. There’s no telling if this is Solange’s final decision, but this wouldn’t be the first time that she pulled out all the stops at the Met Gala. Here are her looks from 2014, and 2015.

We’ll have the answer to this mystery in just a few hours, until then, check out the dress in action below.

"I die every time I get my period" #MetBall day commentary…. Shout out to Jaimee McKenna