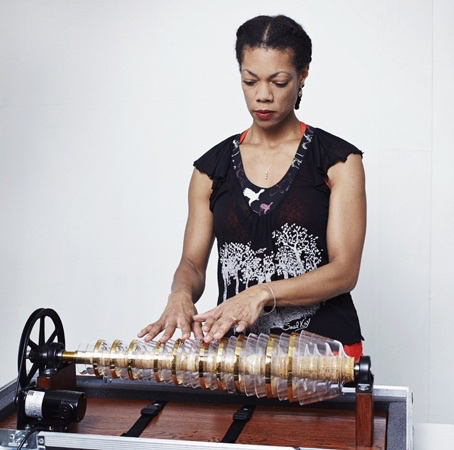 Originally from Silver Spring, Maryland, Camille Norment is a sound artist, writer, artist, musician, and composer, who lives and works in Oslo, Norway.


She employs a variety of instruments, including a rare glass armonica to create a series of melodious, yet vaguely dissonant sounds to explore the socio-political nature of sound and silence and to inspire the listener to rethink what qualifies as actual noise.

According to the artist in an interview with the Cleveland Museum of Art.

Take “white noise”, for example. It’s a form of noise that contains a full or at least very wide sonic spectrum. It contains so many individual tones that it appears as one, a “hush”. The sound of a waterfall is white noise, and considered a relaxing, peaceful sound akin to a silencing. It’s a noise that cancels out other sounds. Both digitally produced white noise and the sound of the waterfall are used to help people fall asleep. It’s a tool for people with tinnitus, creating a silence for those who constantly hear their own personal noise. Saying “shhhh” is probably one of the most basic, human forms of this concept. In this sense, the presense of a leveling noise as silence seems to be instinctive.

Camille Norment was recently chosen to represent Norway at the 2015 Venice Biennale. Her work will be on display in the city’s Nordic Pavilion, from May to November of this year.