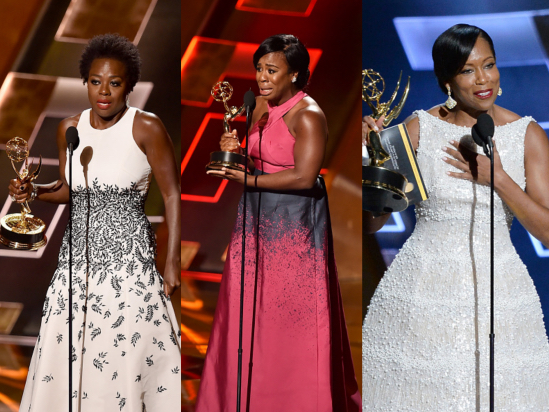 After a total of 12 black women were announced to have scored Emmy nominations last month, I knew that this was going to be a major year for black actresses on TV. And thankfully, I was right.


Last night, How to Get Away With Murder star Viola Davis became the first black woman in the 67-year history of the Emmys to take home the award for Outstanding Lead Actress in a Drama Series, while Orange Is The New Black’s Uzo Aduba scored a win for “Outstanding Supporting Actress in a Drama Series,” and Regina King won the Emmy for “Outstanding Supporting Actress in a Miniseries or a Movie” for her role in the ABC series American Crime. It was a beautiful night, filled with emotional speeches, and so many scenes of beautiful black actresses supporting and encouraging each other.

“Let me tell you something: The only thing that separates women of color from anyone else is opportunity. You cannot win an Emmy for roles that are simply not there.”

Stars also brought their “A” games to the red carpet, with plenty of risky choices including bold prints, and unique silhouettes.