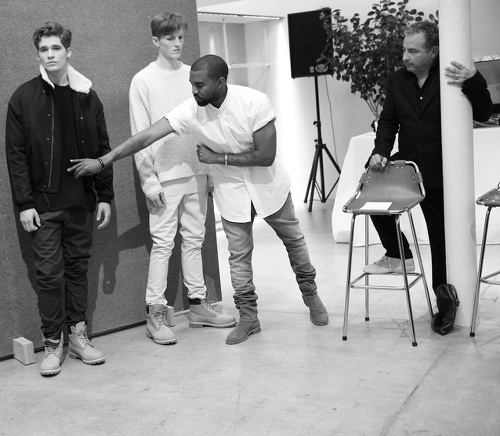 Jean Touitou, founder of French basic-chic brand A.P.C., and close friend to Kanye West, caused a bit of controversy earlier this week when he showed a small menswear collection. Touitou is known to hold up cheeky signs to accompany his collection, but he caused quite a bit of discomfort with the signs he held up at this particular showing.

Then he held up a sign that said, “Last Ni##@$ IN PARIS,” and gave us this exposition: “I call this one look Last N****s in Paris. Why? Because it’s the sweet spot when the hood—the ‘hood—meets Bertolucci’s movie Last Tango in Paris. So that’s ‘N****s in Paris’ and Last N****s in Paris. [Nervous laughter from audience.] Oh, I am glad some people laughed with me. Yes, I mean, it’s nice to play with the strong signifiers. The Timberland here is a very strong ghetto signifier. In the ghetto, it is all the Timberlands, all the big chain. Not at the same time—never; it’s bad taste. So we designed Timberlands with Timberland…”

When a reporter followed up with Touitou over his comments, he offered an explanation, claiming his friend Kanye West had approved of the collection’s name.

“I am friends with Kanye, and he and I presented a joint collection at the same place, one year ago, and that this thing is only [an] homage to our friendship. As a matter of fact, when I came up with this idea, I wrote to him, with the picture of the look and the name I was giving to it, and he wrote back immediately saying something like, ‘I love this vibe.'”

Both Touitou’s comments and his follow-up comments obviously didn’t set well with most fashionistas. Timberland recently issue a statement condemning the presentation’s name and announcing that it would be cutting ties with A.P.C.

Yesterday we became aware of the offensive remarks made by Jean Touitou during his A.P.C. Fall Menswear show in Paris. We have chosen to immediately terminate our involvement with the A.P.C. brand, including the footwear collaboration we had planned for this fall.

Simply stated, this kind of language and approach is in complete contrast with our values. Timberland seeks to collaborate with designers and brands who are at the forefront of lifestyle trends; equally important, they must also share our values. We will not tolerate offensive language or racial slurs of any kind being associated with the Timberland brand.

No word yet from Kanye on this controversy.