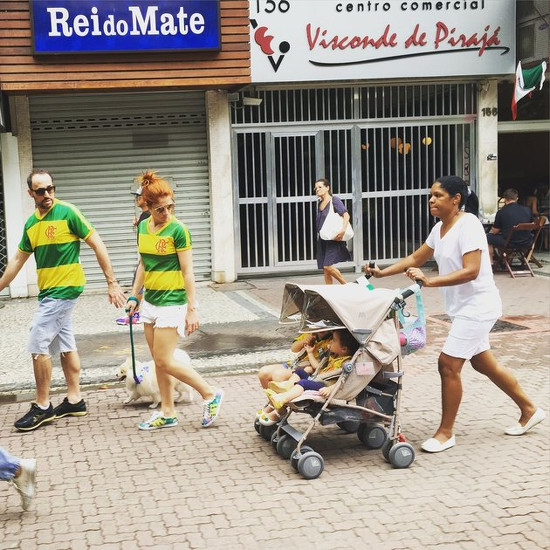 In the wake of ongoing anti-government protests against Brazilian President Dilma Rousseff, one viral photo sums up the centuries-old racial disparities in the country.

With over 2 million Brazilians demanding that Rousseff step down, the above couple joined hundreds of thousands of protesters in the streets of Brazil. The sight of the white couple, identified as Claudio and Carolina Maia Pracownik, walking their dog, with a nanny, Maria Angélica Lima, pushing their children in a stroller right behind them, has sparked a national debate. The image has been shared across social media platforms, with users from all backgrounds weighing. Parodies of the image have also been springing up.

“I look at this photo and I see primarily the repetition of a scene going back to the time of slavery,” Deborah Thome wrote on her Facebook page. “I am disgusted by the sight of a nanny dressed in a slave-maid’s clothes.” Thome, a writer and political scientist, who is based in Rio, was referring to the Lima’s all-white uniform, which is the standard for nannies working for wealth families in Brazil.

Image below perfectly summarizes the profile of the participants in today's "protests" in #Brazil pic.twitter.com/76hZSxtmHt

While Brazilians from all backgrounds have expressed their frustration and outrage at the current state of their government, the very act of protesting highlights the stark differences between Brazilians of African descent and the rest of the population.

According to the Globe and Mail,

The research institute Datafolha said that 77 per cent of participants at the demonstration in Sao Paulo, which was the largest in the country, were university graduates, versus the overall rate of 28 per cent in the city. Half of participants said they earned “between five and 20 times minimum wage,” versus 23 per cent of people in the overall population who earn in this range; 77 per cent self-identify as white although the last census showed just 45 per cent of Brazilians are white.

As the debate rages on, both Lima and the Pracownik have spoken out about the image.

“I thought it was very bad. To expose me that way, to expose my bosses, the children. It wasn’t necessary,” Lima said, in an interview with Brazilian publication Globo.

“This argument of discrimination is unacceptable and prejudiced. As they say: Prejudice is in the eye of the beholder. I am not a ‘madame’ and I don’t mean to ‘show’ that I have a nanny. I chose to have them help to take care of my daughters. If you didn’t choose to hire nannies or don’t need them, good for you! I did, I want the help and I value them! They are thoughtful professionals, caring, patient and loving.”