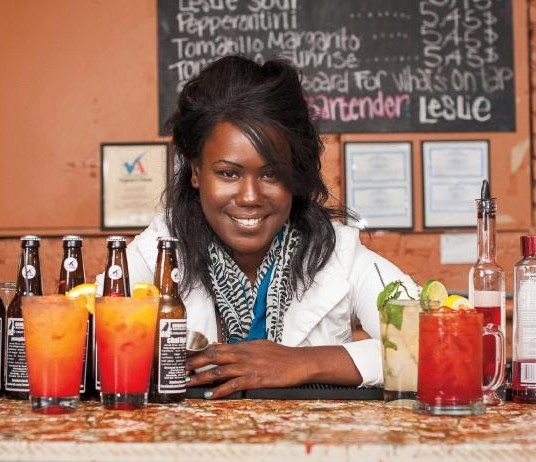 When Leslie Crews, a Virginia Tech grad and former bartender starting brewing kombucha in the spare bedroom of her Norfolk, Virginia townhouse, she soon realized she had found a passion. The popular probiotic-tea drink is known for it’s many health benefits, including aiding in digestion.


In 2010, Crews quit her government job, started her business Kombuchick, and began brewing kombucha full-time. She used $1500 from her savings account to rent a commercial kitchen space, purchase more equipment, and set up a stand at Norfolk’s Five Points Community Farm Market.

“People treated it like a bar, hanging out and asking me to pop a bottle while we talked. We even had people starting tabs and leaving gratuities,” Crews says. Eventually she embraced the idea and turned the booth into Kombuchick Bar, serving pints of kombucha and kombucha-based nonalcoholic cocktails.

In 2013 Leslie expanded her business and now her company is available for corporate events, where she served up some of her unique kombucha creations such as chai stout, jasmine light and hibiscus haze. She also offers a selection of non-alcoholic kombucha-based “mocktails.”

That same year, she won the 2013 SCORE Outstanding Young Entrepreneur Award for her business.

Leslie was also able to expand her business with community support. She currently manufactures about 300 bottles per week, and has been approached by coffee shops and small markets who want to carry Kombuchick. She hopes to franchise her business in the future.