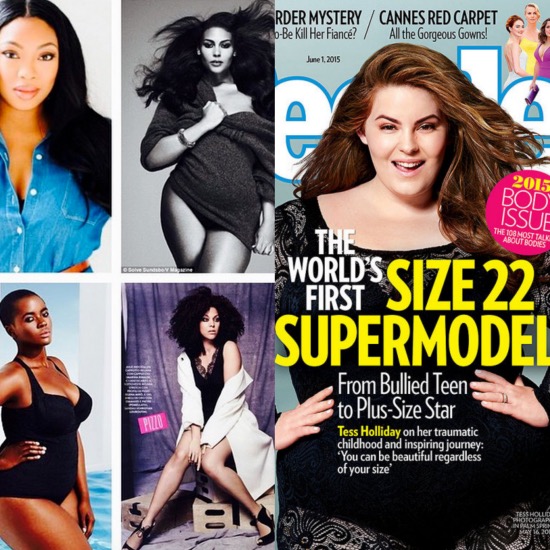 Tess Holliday graces the cover of the latest issue of People Magazine — “The Body Issue,” with an excited smile and “The World’s First Size 22 Supermodel” emblazoned across her chest. The issue highlights how models like Holliday are part of an ongoing revolution to change beauty standards, but something seems to be missing. The body issue is seemingly devoid of black bodies.


People Magazine is just one of many spaces that celebrates a mostly white-washed version of body positivity. Over the past few years, we’ve seen curvy bodies and an ample backsides “finally” become desirable traits. But the leaders of that body particular revolution are Kim Kardashian and Jennifer Lopez. Black stars are rarely mentioned in these conversations. Even a mega star like Beyonce is reduced to an afterthought, and chart-dominating rapper like Nicki Minaj is reduced to a punchline. The use of a larger or curvy black body for a laugh, is a trope as old as time.

The booty revolution has also propelled Instagram famous women like fitness model Jen Selter into the limelight. The internet star rapidly became a hot topic last year, and was even snapped for a spread in highbrow celebrity rag Vanity Fair. But while Selter was showing up in major magazines and even making television appearances, her black counterparts weren’t blessed with the same opportunities. Quite a few of them, in fact, were still being dismissed as mere “Instagram thots.”

The black female body exists in our culture at a complicated intersection of hypervisibility and hyper-sexuality. It’s simultaneously an object of curiosity, desire, and revulsion. That same body is often erased at the drop of a hat to make room for white and non-black bodies. Evidence of the erasure of black women is especially apparent in supposedly “body positive” spaces. Black women are assumed to be eternally confident—a side-effect of the all encompassing “strong black woman” narrative. And, we are also assumed to have identical body types — curvy ones. While white women of all shapes and sizes embark on a body positive revolution, women of color are relegated to a specific space — if we get any space at all.

When speaking with Buzzfeed in 2013 about the lack of diversity in fashion, Barbara Nicoli, a casting director for Burberry, Marchesa, Gucci, Emilio Pucci, Armani Privé & Saint Laurent, offered this rather “interesting” reason for the mostly whitewashed runways,

It’s also true that, for example, Caucasians have a specific body type, black girls have a specific body shape, and Asian girls have a specific body shape. So I guess there are some collections where it’s more perfect for an Asian body shape because they are more flat and less sexy, in a way. Asians, they are not curvy, so to put an Asian [who’s] very flat [with a] baby body shape in a show where normally the designer knows they love sexy, beautiful, curvy girls, it’s a bit of nonsense. If you do it, it’s just because you have to or you want to please your customer coming from Asia. But it’s not certainly because you have, in your mind, the idea that that kind of girl, she’s wearing your clothes properly if you think your girl is sexy.

Polarizing statements like Nicoli’s exemplify a common narrative often placed on both black women’s’ and asian women’s’ bodies. Statements like these opt to center whiteness, no matter what. Women of color are always “too” something, while white women are just right. While Nicoli’s claims assert that white women’s’ “specific body types” are just right for high fashion, their body types also seem “just right” for body diverse spaces as well. Not to mention the high number of black models with “fashion-approved” bodies, who still struggle to find consistent work and visibility in the industry.

The same curvy black body that is often used as an excuse for the lack of black models on the runway is mostly absent in most ad campaigns for plus-size clothing. But if black women are curvy by default, then why are we constantly missing in action in body positive spaces, or simply relegated to the background? Black women’s’ “specific body types,” don’t appear to fit anywhere. 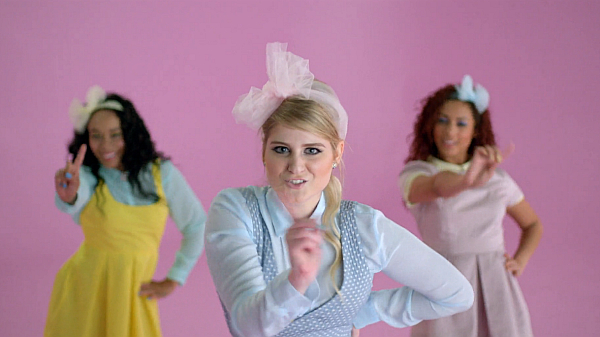 For white women, the body revolution is about changing what their visibility looks like, while for black women, it’s about being allowed to exist, and be visible — in absolutely any form.