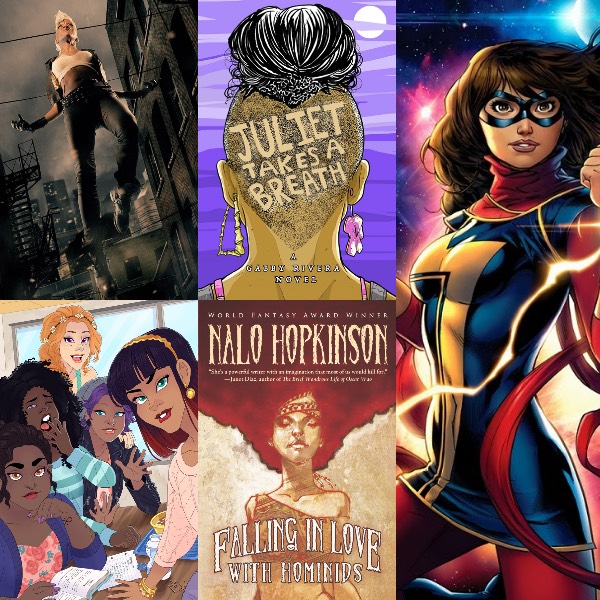 The call for diversity sounded great until a black women promoted it. This past Labor Day, a black female author named A.C. Thomas dealt with racist trolls on Twitter after creating the hashtag #IStandForDiversity. Thomas is the author of the upcoming YA book The Hate U Give, which will be published in 2017, and is currently being developed into a film starring Amandla Stenberg.

One tweet stated, “I stand for diversity because authors like this need pity buyers for their rubbish.” Thomas smoothly replied, “Tell that to the thirteen publishers who fought for my ‘rubbish’ and all the film studios who wanted it.” The troll continued to mock Thomas’s work, calling it “How Stella Got Her EBT Card Back.” Eventually the harassment escalated to the point that Thomas had to change her Twitter handle and lock her account.

This isn’t the first time a black woman has faced vitriol like this on social media. Just last month, gymnast Gabby Douglas was targeted on Twitter for having “an attitude” during the Olympics. Before that, actress Leslie Jones was blasted on Twitter for starring in a remake of Ghostbusters. The unspoken message that these incidents share is that people are fine with diversity as along as isn’t too diverse. You can be in books, but you can’t write them yourself.

In an article for Media Diversified, Khavita Bhanot writes that diversity can result in tokenism if there are only a certain amount of people being reached out to and promoted.

“The concept of diversity only exists if there is an assumed neutral point from which ‘others’ are ‘diverse.’ Putting aside for now the straight, male, middle-classness of that ‘neutral’ space, its dominant aspect is whiteness.”

Bhanot also points out that when marginalized people are promoted by people with more privilege, the more privileged person gets the attention. In other words, diversity can mean white people congratulating each other for saving a few marginalized identities and forgetting the rest.

Essentially, when diversity starts to have certain conditions and focuses on privileged people, it lessens the impact of those who need diversity and of those who are working towards diversity.

My frustration with diversity is personal. At the beginning of the year, I started to notice how I had to compromise my identity in order to identify with the media that I enjoy. When I attempted to find a relatable young adult book with LGBTQ people of color that’s also written by LGBTQ person of color, only book I found that fit the bill was Juliet Takes A Breath by Gabby Rivera. Unfortunately, the whiteness of LGBTQ young adult made it hard to find similar titles.

Another disappointment came when Marvel Comics announced the upcoming Captain Marvel and Black Panther superhero films. Although I don’t like many superheroes, I would’ve been happy to see a solo Storm film or a Ms. Marvel Kamala Khan film. Instead, I settled on Maya Glick’s fantastic Storm fan film and rereading my Ms. Marvel comics.

I am not the only one who has been frustrated by feeble diversity attempts. One of my Twitter followers, @MistyKnightsTwistOut, tweeted about the lack of black women superhero films last month. As the host of the podcast The Lemonade Show, she even did an entire podcast episode on the tweet after she received backlash. While it obviously wasn’t racist, people were still asking why she wasn’t happy with Catwoman and Storm.

Vernã Myers, a nationally recognized consultant on diversity and inclusion, summed up the issue perfectly in a past essay. “Diversity is being invited to the party, but inclusion is being asked to dance,” Myers wrote.

I don’t want to just see fictional characters that look like me. I want to see black women included in the scenes and behind the scenes.

While, of course it’s okay to enjoy media that isn’t particularly inclusive or diverse, it’s also important to support media that is. It’s often said that “representation matters,” but creators need the backing of consumers. And, even if you can’t afford to buy their work right away, you can still tell someone else about it.

As a consumer and a critic, I support, critique, and promote inclusive media, because there is no point in being diverse if black women are seen but not heard.