Why New York Artist Ayana Evans is Doing Jumping Jacks For Over 2 Hours at a Time, in High Heels. 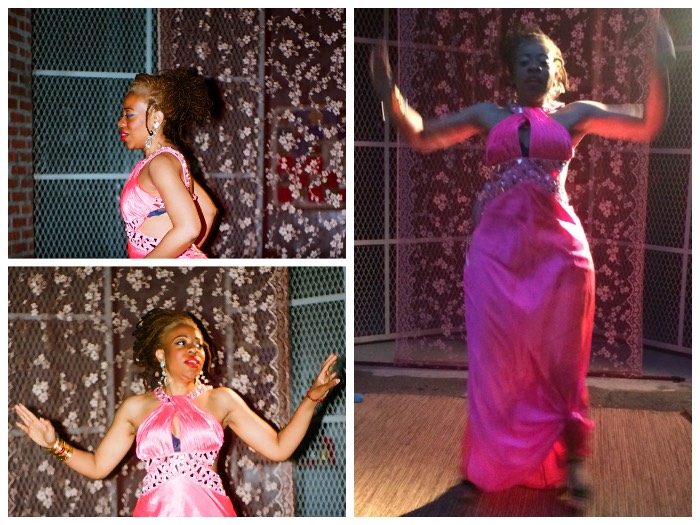 In “Stay With Me” New York artist Ayana M. Evans presents a challenge to herself and to her audience, as they watch her perform a series of jumping jacks in high heels for over 2 hours.

“‘Stay With Me’ is a political statement about women, our bodies, our struggle to look good even under pressure.”

“There is a lot in the piece about body image, specifically the black woman’s body, specifically since I am the one performing it and perseverance is also an obvious theme,” says Evans. “Unintentionally this piece reflects community because it always leads to the audience cheering me on at the end. Both times I’ve done it audience members even jump with me at some points to encourage me. People want to see you succeed that is the best part of this work for me.” 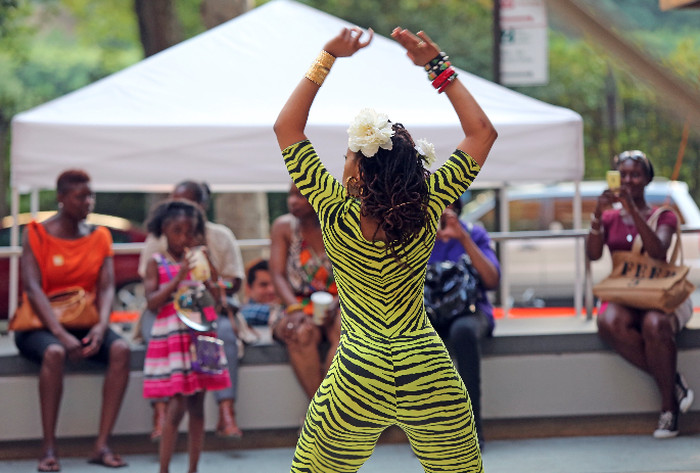 This isn’t the first time Evans, has tackled the subject of the black female body in the public sphere. In her 2012 project, “Operation Catsuit,” she navigated several galleries and museums of New York City, while wearing a bright yellow catsuit. A collaborator secretly filmed the reactions of the art goers around her, many of whom pointed and laughed and even secretly photographed her, often taking care to get a good shot of her hips and rear. The piece sparked mixed, but visceral reactions from internet commenters.

“The audacity of these people taking pictures or her without her consent. This video is so upsetting to me,” wrote one viewer.

“Physically, you looked very impressive. Although extremely risky wearing that outfit in a much conservative environment, but I commend your courage and determination of doing that project,” wrote another.

Evans has performed “Stay With Me” in both public and gallery spaces. Due to her candor, the piece seems to straddle a line between private and public, inviting interaction in both realms.

“In a gallery you are shut away from the public, but there are things you can do to break that barrier.”

“Usually when I perform in a gallery I have some level of audience participation involved,” says Evans. “For example, I performed a few weeks ago at Grace Exhibition Space in BK. I did jumping jacks upstairs and then ran down a flight of stairs to the laundromat across the street and repeated jumping jacks there. That gallery has a huge bay window facing the laundromat that made it easy for the gallery patrons to watch everything. I gave audience members the option of coming with me (meaning literally running and jumping with me) or they could watch. Leaving the gallery and becoming immersed in the piece changed the dynamic of the piece. I also recently had a gallery show on Bowery at Gallery Sensei and there I began at the back of the space and moved forward to perform in the bathrooms, the main gallery, the front sidewalk, and then the middle of the street. That time I carried swung a chair and interspersed those actions with chair dip exercises the whole time. The audience followed me outside. The piece moved from private to public.” 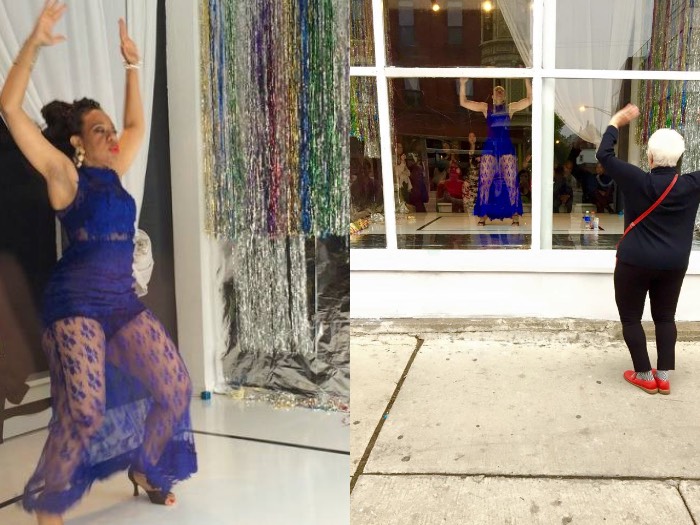 This past weekend, Evans took “Stay With Me” to Brooklyn’s Five Myles Gallery. She performed on the sidewalk directly outside the space, as part of a group show, #BlackGirlLit.

#BlackGirlLit features a series of performance pieces by black women artists. Organized by curator, artist, and performer Dell M. Hamilton, the show brings together pieces that work within the feminist/womanist framework of authors like Toni Morrison. 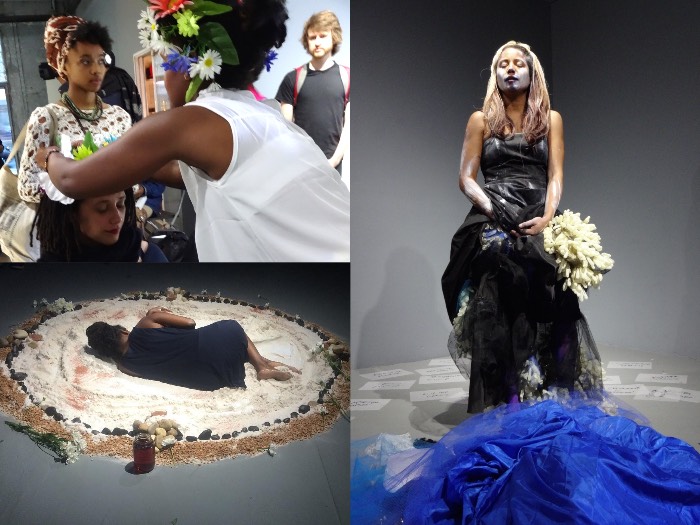 Undeterred by the cold and rain, Evans performed “Stay With Me” outside as other artists continued inside. The audience would move between the two spaces taking in different levels of intensity.

Occasionally, passersby would pause and curiously stare at Evans before continuing on their way. A few even returned later on to take in the show and chat. As Five Myles is located on a partially residential street, she spotted a few onlookers taking snapshots from their apartment windows.

Evans, who is also a fashion designer, makes it a point to perform in a dress and heels.

“Sportswear makes it basic. This isn’t basic. This is formal. You’re presenting yourself,” says Evans, answering an audience question as Drake plays in the background.

When asked if her fashion and art careers inform each other, Evans had this to say:

“I definitely think my background in fashion influences my art career! It literally reflects in the way that I think of dressing myself for openings and performances. But it also is in my approach to promotion and networking in art. The ideal of mass appeal is more respected in fashion. I think my mindset is to respect mass appeal in my art as well. I think that’s part of why I enjoy posting on YouTube, performing in public, and pop culture references.”

“The funny thing is I think hierarchy is more strongly engraved in fashion so some of the same networking moves that may not work as quickly in fashion are brilliant door openers in art.”

The Chicago native, who is a big fan of hometown star Common, manages to keep her energy up to a playlist that mixes Hip-hop, R&B pop hits, and several slow jams.

Evans works with a trainer to prepare for the performance and her post-show rituals include delicious foods and hot baths.

“My knees can only take doing this once a year. I think I will only perform this piece twice more in my entire life,” she says.

Her engaging personality and magnetic energy draws viewers in, in such a manner, that I too felt a need to decompress after watching her. Whether you stayed with Evans or not, you definitely took a piece of her performance with you.