#WhyWeCantWait. A Call For Inclusive Racial Justice That Supports Black Women and Girls. 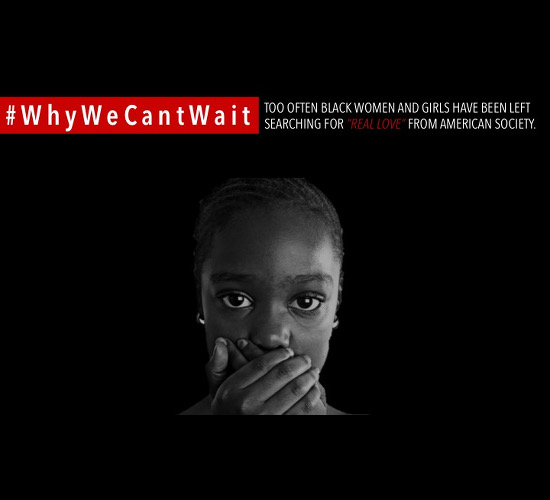 Over a year ago, the African American Policy Forum issued an open letter to President Obama urging him to acknowledge the specific barriers faced by black women and girls in America.

“Our daughters’ lives are disproportionately at risk, as data on violent victimization make clear. Native American girls are victims of rape or sexual assault at more than double the rate of other racial groups, while Black girls have the highest rates of interpersonal victimization from assault and are more likely to know their assailant than all other groups. Additionally, the homicide rate among Black girls and women ages 10-24 is higher than for any other group of females, and higher than white and Asian men as well.”

Like many activists and advocates, the AAPF felt that My Brother’s Keeper, a program for young men of color, supported by the White House and President Obama, neglected to acknowledge black girls.

In a recent speech to the Congressional Black Caucus, the President applauded black women for their role in the Civil Rights movement, and also acknowledged that black girls have been overlooked in the past.

“In these discussions a lot of my focus has been on African American men and the work we are doing with My Brother’s Keeper,” he said. “We can’t forget the impact the system has on women as well.”

Kimberlé Crenshaw, the executive director of the African American Policy Forum and a professor of law at Columbia University and the University of California, Los Angeles, law schools, penned a poignant essay for The Washington Post on the importance of intersectionality, especially for black women and girls.

Crenshaw, who first coined the term, stressed that “Intersectionality was a lived reality before it became a term.”

Intersectionality is an analytic sensibility, a way of thinking about identity and its relationship to power. Originally articulated on behalf of black women, the term brought to light the invisibility of many constituents within groups that claim them as members, but often fail to represent them. Intersectional erasures are not exclusive to black women. People of color within LGBTQ movements; girls of color in the fight against the school-to-prison pipeline; women within immigration movements; trans women within feminist movements; and people with disabilities fighting police abuse — all face vulnerabilities that reflect the intersections of racism, sexism, class oppression, transphobia, able-ism and more. Intersectionality has given many advocates a way to frame their circumstances and to fight for their visibility and inclusion.

You can support #WhyWeCantWait by signing the open letter or sharing your thoughts.