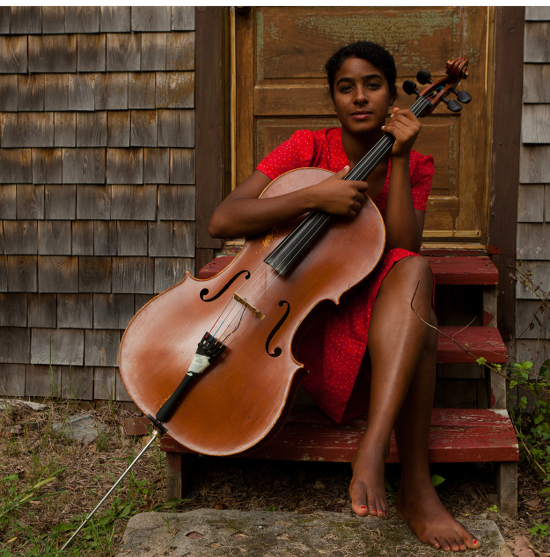 I recently chatted with folk music extraordinaire Leyla McCalla. In the interview we talked about a range of topics varying from motherhood to balancing her busy life.


Andrea: 2014 was a big year for you in so many ways. You released an album back in February, tied the knot, had a baby girl, and you went on tour with your family as well. How did you balance it all?

Leyla McCalla: Well, when I was pregnant I did yoga every morning which really helped center and ground me. It’s kinda like when certain things come in your life, you just figure it out and I think that’s what I did. I never imagined that all of those things would be happening at the same time. I thought, okay, I wanna make a record and I told my mom that I wanted to have a baby but at the time I wasn’t ready to do the latter. From that conversation my mom advised me to focus on the album but those things all happened at the same time [laughs]. I knew that both of those things were right, but I also had a great reference of how I could balance a music career and family. When I was touring with the Carolina Chocolate Drops [Grammy award winning], Rhiannon Giddens traveled with her family. I knew having a child wouldn’t slow me down too much, well, at least it’s slowed me down in all the right ways.

Andrea: So from that experience it was sort of a no brainer to bring your family along with you while touring?

LM: Yeah. It’s a bit complicated figuring out how much I can tour. I’m just trying to figure out how to make it all work within my family. I’m cognizant of my husband’s schedule; he’s an electrician my day, but he’s also a great musician [five string banjo and guitar] and we’ve started playing music together. Playing together has opened up a new chapter for us, which is exciting.

Andrea: I typically don’t delve in too deep about spouses but can you tell us how you two met?

LM: Sure. We actually met at a bar in New Orleans. He walked up to the bar, I heard his voice and we just started talking right away. We’ve pretty much been inseparable ever since. People don’t normally go to bars to meet the love of your life but I did [laughs].

Andrea: What about motherhood? Is it everything you expected it to be?

LM: No [laughs]. I don’t know what I was expecting but I think it’s more complex than I could ever put into words. Caring for another human being twenty-four-seven is a really special thing; I love my daughter so much. She’s six months and I feel like we’re getting really close- she definitely knows who I am. In the beginning I couldn’t even tell if she recognized me as her mother, and so I think that was kinda hard for me at first.

As far as preparing myself, I read up on so much stuff about parenting prior to giving birth but I skipped every chapter on postpartum. I had no idea I was going to feel such a wide range of emotions. It took me a while to catch up to myself. It was really intense but now I feel like the love and bond between her and I is really beautiful.