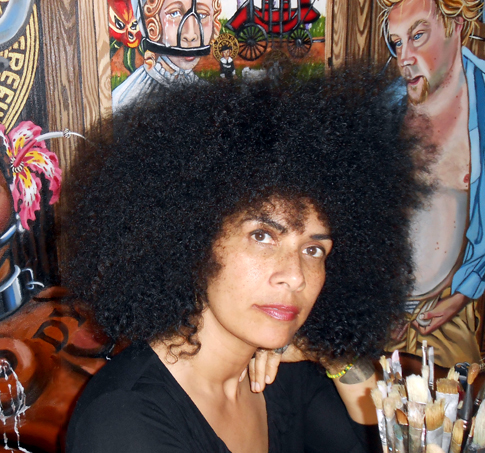 The Pan African Film Festival was founded by Ja’net DuBois, Danny Glover and Ayuko Babu in an effort to showcase the cultures of Africans and people of the Diaspora. The organization is especially committed to highlighting positive images in our communities while actively avoiding the reinforcement of negative sterotypes. Here you’ll find a list of standouts from the recent festival in February.

Born in Cuba, at an early age, Lili Bernard discovered the magic of shapes and colors and knew she was going to be an artist. Her paintings are a firework of colors, a family album and a political statement. Lili’s activism reaches far beyond her frames and becomes social in her curatorial work and community involvement. The exhibitions she organizes succeed in bringing together artists from various horizons and levels of experience. In order to challenge white supremacy in Los Angeles’ cultural landscape , she first created “HABLA” for Harvesting Asian, Black, Latino Artists, then “BAILA” for Black Artists in Los Angeles, both associations aiming at fostering the access of these groups and their works to mainstream museums and cultural venues.

Go here for more on the amazing artist.

“The New Black” is a documentary that tells the story of how the African-American community is grappling with the gay rights issue in light of the recent gay marriage movement and the fight over civil rights. The film documents activists, families and clergy on both sides of the campaign to legalize gay marriage and examines homophobia in the black community’s institutional pillar—the black church—and reveals the Christian right wing’s strategy of exploiting this phenomenon in order to pursue an anti-gay political agenda. The New Black takes viewers into the pews and onto the streets and provides a seat at the kitchen table as it tells the story of the historic fight to win marriage equality in Maryland, charting the evolution of this divisive issue within the black community.

Haitians locked in the hold of a fishing vessel are being smuggled to the US. If they get sick, they are thrown overboard. Seventeen-year-old Sandrine must hide the fact that her brother Etienne is sick in order to save his life. Stars Stephen Williams.

Black and Cuba follows street-smart Ivy League students who are outcasts at their elite university as they band together and adventure to Cuba to see if revolution is truly possible. With cutting-edge style and humor, this inspiring documentary illuminates how racial equality is an international human rights issue. The film also reveals a fresh perspective on the US-Cuba conflict. Due in part to the US government’s ban on travel and trade with socialist Cuba since 1962, many Americans are unaware the island’s population is 60% Black. Human rights activists assert this embargo violates the human rights of Cubans and Americans. Intent on sharing their experiences, the students film their journey. Through the streets of Havana and Santiago, they observe the literal signs of revolution—”Venceremos! We Will Overcome!”—as well as moving hip-hop performances. A stirring block party at a racially integrated housing project impacts the travelers in surprising ways. Candid, spontaneous encounters with Afro Cubans highlight similarities between African-American, Latino and Cuban experiences…..

Anna and Kirsten, a married couple, care for Anna’s terminally ill and homophobic father and struggle to maintain their relationship through the difficult times they face. Stars Grasie Mercedes, Dawn Noel and Kurt Sinclair.

“Diaries of an Immigrant”

A Guyanese mother sets out to find a better life in Barbados. She is forced into a life of danger and vice from which she sees no exit. Although this is a life she never wanted, she lives it for the sake of her family. Stars Nikita Akasma Kunar, Jerelle Joseph, Kim Weekes and Caroline Brathwaithe.

During the summer of 1964 more than 700 student volunteers joined with organizers and local African Americans in an historic voter registration effort that would shatter the foundations of white supremacy in Mississippi, the nation’s most segregated state. Now known as “Freedom Summer,” this 10-week period was marked by sustained and deadly violence, including the notorious murders of three civil rights workers, countless beatings, the burning of thirty-five churches, and the bombing of seventy homes and community centers. In response to the unrelenting challenges to registering Black voters directly within hostile Mississippi, the Mississippi Freedom Democratic Party was born….