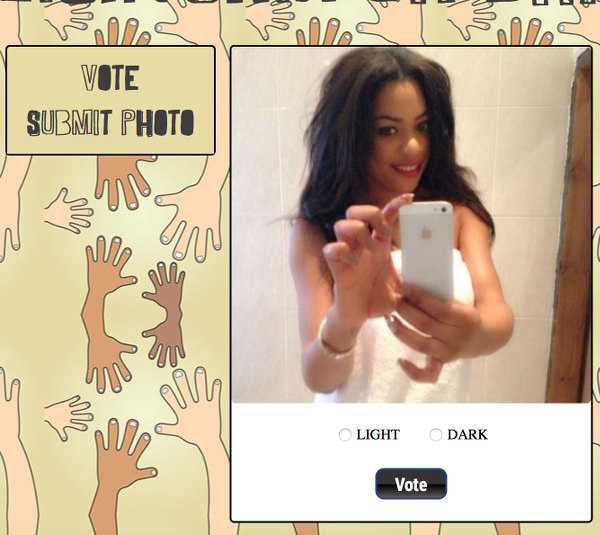 Nate Hill is a New York based performance artist who first attracted the internets attention with his series “Trophy Scarves,” which featured portraits of the artist literally wearing white women, as a commentary on how white women are objectified and put on a pedestal by men of color.


His latest project, “Lightskin or Darkskin,” tackles colorism and how it relates to the policing and perceptions of blackness. Vistors to the project’s website can submit their own photos or vote on other submitted images. Hill, himself and his wife are both biracial, had this to say about the work,

“[The work is] a response to discrimination based on color, and an example of how not to think. It’s about blacks, because I’m half black. I like making wrong things sometimes, so I can be corrected, and we all win,” he told Hyperallergic.

“For me, I’m interested in finding that black person out there who scores a perfect 50/50 (50% lightskin / 50% darkskin). Where can we agree the line is, and what do they look like?”

“Race mixing is increasing of course, so it’s becoming harder to even tell what people are anymore, and harder to accurately deliver some prejudice,” Hill says. “If we’re speaking about ‘black on black’ skin tone prejudice, but I can’t tell how much black you have in you, then how can I judge if you are ‘lightskinned’ or ‘darkskinned’?”

Much like the colorism debate, Hill has no foreseeable end for this project, so for now, it’s ongoing.