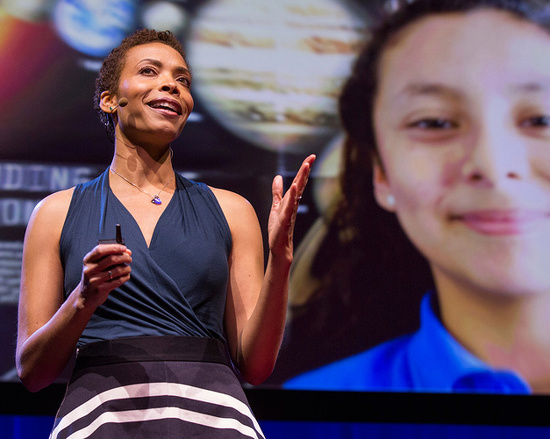 
Shields, who is also a classically trained actress and has performed in several stage productions, was recently named a 2015 TED Fellow. She channels her skills as an actress into being an amazing and inspirational public speaker.

Dr. Aomawa Shields is a Renaissance woman in every sense of the word. She effortlessly utilizes knowledge gleaned from studying a diverse range of of subjects to inform her various endeavors.

Shields is the founder of Rising Stargirls, an organization dedicated to encouraging girls from all backgrounds to learn about the universe and pursure STEM careers.

“I wanted to encourage more girls from backgrounds traditionally underrepresented in the sciences to consider astronomy careers. But I didn’t want to teach them astronomy in a conventional, lecture-based way — or even do typical hands-on astronomy activities. I wanted to use my unique background,” says Shields.

“My workshop, which is called “Universe: More than Meets the Eye,” aims straight for the fact that girls, when they’re in middle school, start to get quiet. They start to raise their hands less often, and become overly concerned with how they appear to others — how pretty they look, what’s on the outside — and less concerned with what they’re thinking and feeling. But there’s so much more to them than that, and whether they can learn facts about planets. I thought, “Let’s take a multifaceted approach to astronomy.” I was lucky to have funding from the National Science Foundation, which values this kind of outreach work just as highly as my research.”

Shields, who left the field of Astronomy for 11 years, and re-entered grad school at the age of 34, hopes that her story will inspire other women who are considering a career in Astronomy.

“There’s no one way to be a scientist,” she says.