LGBTQ Movements in Africa and The Diaspora. 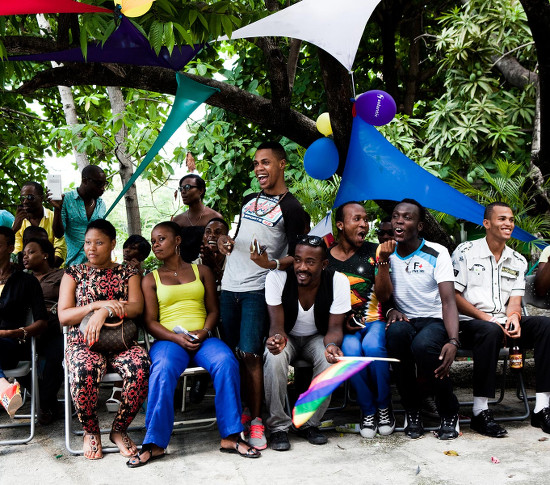 (The audience at a LGBTQ Pride Celebration in Haiti. via Al Jazeera America.)

President Obama recently took a trip to Jamaica to discuss among other things, “ bilateral talks with Prime Minister Portia Simpson as well as meeting with leaders from the Caribbean Community (CARICOM).” While addressing a sizable audience at the University of West Indies, our head of state made clear and passionate statements in favor of LGBT equality. His remarks were especially noteworthy due to the region’s intolerance toward this sect of its population.

On a larger scale, the fight for global LGBT equality remains just as stagnant in many parts of world as in Jamaica. While we’ve seen considerable change in some countries, the reality remains dangerous for many LGBT citizens in various regions around world. On the extreme end of the spectrum– Islamic nations, most of sub Saharan Africa and the Caribbean are lagging behind where it comes to human rights laws and protections for those in the community. As shown in the list compiled, we’ll highlight countries in Africa and the Diaspora and expound on where they precisely stand on the issue of LGBT equality.

While South Africa holds one of the most liberal constitutions in the world, “corrective rapes” and physical violence remains to be a problem specifically as it relates to lesbians living in lower socio-economic areas. As it stands, the country’s laws protects LGBT citizens where it comes to adoption and gay marriage, but this isn’t to say cultural attitudes across the board are homogeneous. There are many in South Africa fighting for the rights of LGBT South Africans; Zanele Muholi being one of many, using her visual activism to bring awareness. Check out her work, as it catalogues LGBTQ lives in her home country.

While the Cuban government holds a more liberal stance on LGBT rights, some citizens have remained unaccepting. When comparing to other countries compiled, Cuba appears to be the “safest” place to live where there is a substantial black community.

According to a New York Times piece, “Mariela Castro, the daughter of the current president, Raúl Castro, has led the charge on legislative and societal changes that have given rise to an increasingly visible and empowered community. “She [Mariela Castro] has taken off a lot of the stigma for most people in the country, and she has made life so much better for so many gay people, not only in Havana but in the provinces.”

As of some weeks ago, the Puerto Rican government dropped its opposition to same-sex marriage. This is excellent news, as Puerto Rico is comprised of a diverse set of people–31 percent considers themselves as mixed, and 6.3 percent as black.

Homosexuality is illegal and criminalized in Somalia. Diriye Osman is an outspoken activist and author, was born in Somalia but later moved to Nairobi, Kenya. His work explores themes like “identity, sexuality, immigration, diaspora, family, mental health and trauma.”

Jamaica was branded the most dangerous place on earth to be gay, but in recent years Uganda has arguably taken the title. There’s been an incline in violent acts since the passing of “kill the gays bill.” Over the summer, the same bill was struck down due to technicality but the country remains to be a hostile and unsafe place for queer folks. On the other side of the spectrum, activist David Kato (watch “Call Me Kuchu”) was the most outspoken leader of LGBT rights in Uganda; he was murdered in 2011. Since Kato’s passing, Kasha Jacqueline Nabagesera has taken over as the most vocal leader in Uganda’s LGBT movement. Kasha was recently honored by Harvard Law for her activist work. The activist has also been busy publishing a free magazine Bombastic which features stories of Uganda’s LGBT population.

The experiences of LGBT citizens in Brazil vary drastically. São Paulo remains to be Brazil’s most welcoming city toward this sect of its community. In 2013 gay marriage was legalized. Also, Brazil heads one of the largest gay pride parades globally; not to mention hosting the largest gay wedding in history in 2006–all incredible feats. On the other hand, violence is prevalent; Brazil’s murder rate was particularly high in 2014 with regards to cases involving those in the LGBT community. Most recently, Veronica Bolina, a trans woman from Sao Paulo, was reportedly placed in a male prison after being arrested and subsequently stripped, beaten, and humiliated.

As it stands, the Caribbean nation and Belize both have legal bans forbidding anyone “seeming” homosexual from entering said territories. Activist Maurice Tomlinson recently challenged the issue in court.

Haiti’s LGBT community recently celebrated it’s first Pride parade in 2014. Unfortunately, Haiti remains to be among the Caribbean nations that continue to denigrate its citizens; violent acts are common. A blog post by Projects.Aljazeera.com reads:

While the debate over gay rights is deeply dogmatic, moralistic and religious in tone, most of the attacks come from members of the Christian community and evangelicals in particular. On the other hand, many gays feel comfortable expressing themselves in Voodoo, the religion that grew from the intermingling and evolution of beliefs from diverse African slaves imported to Haiti along with French Catholicism. It now is practiced by the majority of the population.

It’s also important to note, similar to Jamaica and certain African countries the most vulnerable of the LGBT population remains to be lower classed citizens. A gay Haitian man expounded on his experiences there: “There are many wealthy gays in Haiti who have no problems, but on the other hand, “If you have no degree, if you have no money, they treat you like you are nothing.” There has been increased visibility in recent years, but most against homosexuality tend to have a “keep your sexuality to yourself” attitude. A “let’s not even talk about it” stance.

The punishment for being gay is especially archaic and brutal in Nigeria. Gay sex has been illegal since the colonial days; punishment for “acting gay” or carrying out such acts can result in up to ten years behind bars and even death. In a scathing piece written by Adam Nossiter of the New York Times, Nossiter perfectly paints a picture of what life is like for LGBT Nigerians. “For gay Nigerians, the risks of coming out could not be higher. In the north, you will be killed.”

The eastern African nation, that borders Tanzania and Zambia, frowns upon homosexuality; imprisonment a common punishment for engaging in homosexual acts. A recent passage of Marriage, Divorce and Family Relations Bill leaves room for interpretation as to whether same sex marriages done outside the country will be recognized. I surmise there will be much push-back against the bill from citizens and those in government posts to make the ruling more explicit. As it stands there are approximately 40,000 gay couples living in Malawi.

These two countries stand precisely where the majority of other African nations stand on the issue. Violence is unfortunately a reality and imprisonment enforced for those in the community. Read the poignant interview of activist Josephine Mandeng. She talks about the dangers of being an out lesbian in Cameroon.

Check out these sites to keep abreast on LGBT issues globally.