On Chescaleigh and Lena Dunham. It’s Not Only About Choosing Your Battles But Also Your Weapons. 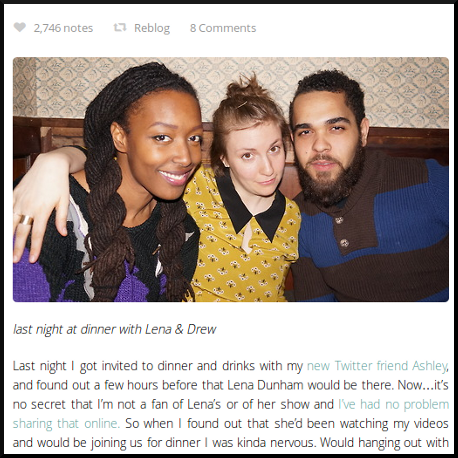 As a black woman who hate watches Girls (it’s a serious addiction I can’t shake), I understand – and agree with – the criticisms heaped upon Lena Dunham for her exclusion, and then objectification, of black people. So does Franchesca Ramsey, also known as Chescaleigh, which is why she has very publically criticized Dunham and the show.


On March 16, Ramsey attended a dinner that Dunham also happened to be present at. The next day, she wrote about what she learned about herself from the night. She realized that some of her criticisms of Dunham were mean-spirited and unproductive. She did what many of us attempt to avoid, she saw a flaw in her character and decided to change it.

(screenshots of tweets via @chescaleigh )

To her chagrin, black women on Tumblr were displeased with her recap of the event. Some even went as far as to call her a coward and a white apologist. Ramsey is fairly well known for calling out racism. Branding her as a white apologist and an “Uncle Tom” is not only incredibly unfair, but disrespectful.
Ramsey attended a friendly dinner and point-blank told an often-problematic white woman that she did not particularly like her or her show. And still, they were able to have an honest, cordial conversation about why she feels that way. I consider that a win for black women and I admire Ramsey’s courage. Personally, I can regretfully recall many times when I’ve bitten my tongue in order to save white people from feeling uncomfortable and keep the social mood light.

The attacks on Ramsey included accusing her of tone policing black women because she suggested that there is a kinder, more productive way to call people out than the method she had formerly been using. Her expressing the decision to not verbally attack Dunham was somehow misconstrued as her saying that black women shouldn’t be angry when calling out white women. She never said that. She simply said that she preferred a subtle approach.

I know Respectability Politics are a touchy subject in the black community and I have no desire to impose them on anyone or police anyone’s tone, but it is worth reflecting on which arguments yield the best results. When two people are shouting at each other, neither point is heard. I am fiercely passionate about feminism and racial justice, but I have to keep my emotions in check when debating others, because if I get too angry, I’ll resort to personal jabs, which undermine my argument and I don’t want to be that person. And, I understand why Ramsey doesn’t want to be that person either.

I am particularly disappointed when I see black people tear each other apart. We already have enough oppression to fight against in this world; we shouldn’t be fighting each other. If you’re itching to call out a black person, focus on one who actively contributes to our oppression, such as a certain Supreme Court Justice. Don’t nitpick at a woman who has proven that she’s down for our cause because she socialized with Lena Dunham at a dinner party. We have to pick our enemies and choose our battles carefully.

Before you get in the ring and start swinging, remember that boxers have to meet each other halfway and tap gloves, first.