Reviews. Documentaries. Between the Media and Mizzou in ‘Concerned Student 1950.’ 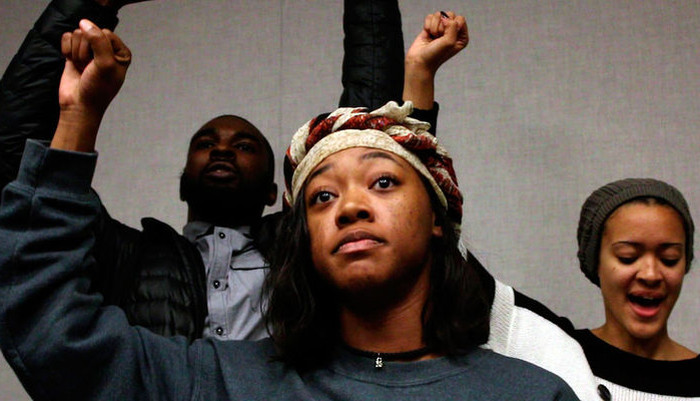 The relationship between the media and protestors, has always been a contentious one. Often times what’s broadcast on television and published in articles doesn’t reflect a well-rounded understanding of what is actually happening on the ground. When the infamous “No Media” signs encased the tents of student protestors at the University of Missouri, it was not only an attempt to create a safe space, but to take control of their story.

University of Missouri, Mizzou, made headlines in November 2015 when the Football Team refused to attend practice or play in future games as an act of solidarity with Concerned Student 1950, a student organization named in honor of the year the first black student was admitted to Mizzou. It was an act rarely, if ever, seen by student athletes who are often the face and financial force behind their institutions, their voices and interests seldom heard. However, the problems at Mizzou stretched further back than the football team’s involvement. After a series of racist attacks taking place on Mizzou’s campus was met with continued silence by former University President, Tim Wolfe, a graduate student, Jonathan Butler, went on a hunger strike calling for the resignation or termination of Wolfe.

The 8-day strike culminated in a rally of support for Butler and sparked campus wide protests highlighting what really happens at Mizzou. Attention began to swell and Concerned Student 1950 maintained a safe space — guarding themselves from the media who had recently swarmed Ferguson, Missouri and pumped out articles that shifted focus away from the murder of Mike Brown and misconstrued civil unrest for unprovoked violence. It happened again in Baltimore. It happened in Cleveland. It began to happen at Mizzou when journalists misread students’ insistence on a safe-space as a hatred for journalist. The distrust of the media’s intentions often begs the question of who can one trust with one’s story?

Concerned Student 1950 is a documentary providing a rare inside look into a story fiercely protected by students. The 30 minute film shows a student-led movement with a spirit and dedication reminiscent of their SNCC and BPP predecessors. We see just how far students are pushed to ensure a safe learning environment. Butler’s hunger strike is not an action all of his peers agree with, but the frustration and desperation is an ethos that rocks the campus’ foundation waking up students who initially felt powerless. From the beginning of the movement students set up a strict opposition to media coverage. Signs bearing the words “No Media” stand as buffers between the revolutionaries and those whose only aim is to get “a story, they’re [the media] are not really here for our voices—some of these people are students and they want a job, that is what they’re here for.” 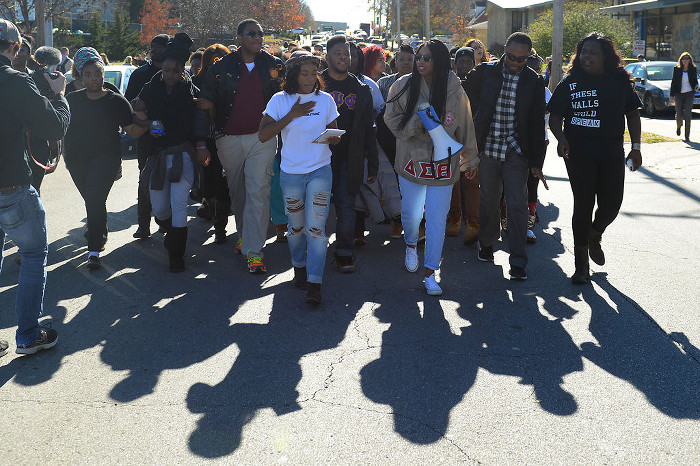 It’s a distrust rightfully felt, as no outsider can fully grasp the gravity of the students’ struggle to exist at an institution where one’s gpa and achievements cannot save them from being viewed as “a bunch of niggas.” No article would cite the armor of hugs protesters cloaked themselves in, or the tears and prayers exchanged after an emotionally tense demonstration. Concerned Student 1950 shows the physical, mental, and emotional weight student activists carried on their shoulders as they demanded not for dialogue, but action.

One of the most powerful moments in the documentary is when the crowd of victorious students dance to Kendrick Lamar’s “Alright” after the announcement of Tim Wolfe’s resignation. The celebration is quickly interrupted by not only the media’s misinterpretation of safe-space, but violent threats made against Mizzou’s black students in a series of tweets. We see just how short-lived a reprieve in the battle for justice is, but just when the body begins to get weary and fear begins to prey, the group of students join hands in a robust cry of “ASHA, POWER. ASHA, POWER,” reminding us all of the strength and power in solidarity.

“This is not a moment, this is a movement,” shouts one of the Concerned Student 1950 founding members.

Eventually, the barrier of “No Media” surrounding the protest tents are taken down as students begin to reflect on the power of media’s role in the revolution.

Concerned Student 1950 is an in-depth look inside a movement that sparked several campus uprisings across America and will leave viewers questioning the media’s complicated role in the revolution.

Watch Concerned Student 1950, in its entirety, below.

Field of Vision – Concerned Student 1950 from Field Of Vision on Vimeo.