Women of Color Share Their Experiences With Street Harassment. A Few Thoughts. 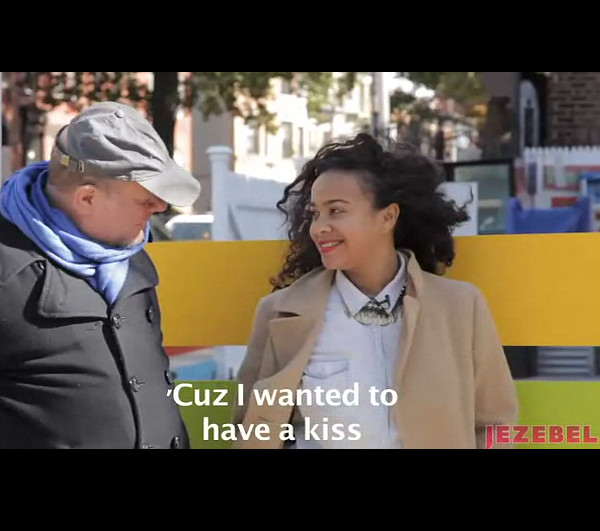 
I’m sure that by now you’ve seen the viral video produced by anti-street harassment organization Hollaback, as well as the responses to it. The most common response to the short video, are the accusations of racism in that the video features a white woman, being harassed mostly by Black and Latino men. Despite the disclaimer at the beginning of the video stating all races of men had harassed the actress featured in the video, these visuals create a singular narrative of what street harassment looks like. Another major racial aspect, is the exclusion of women of color.

The producer of the video, Rob Bliss, had this to say on Reddit about the exclusion of white men in the video,

“We got a fair amount of white guys, but for whatever reason, a lot of what they said was in passing, or off camera.”

I’m not surprised at the omission. Hollaback hired Bliss, a viral video expert, to create a video that would attract the most eyeballs and press coverage and that would keep people talking and sharing the video in order to solicit donations. In order to do his job and produce results, Bliss and his agency needed to create a video that would be able to compete with other viral videos. Essentially, he had to create a video that would be able to stand out in a climate where the most popular YouTube and Vine stars regularly produce sexist, racist, and homophobic content. This video, which was created to bring attention to an issue that disproportionately affects women, had to be able to compete with other videos featuring women or people of color being assaulted or humiliated, or acting out stereotypes. He also had to compete with the new era of Vine and Instagram videos, by condensing 10 hours of footage into series of clips totaling about a minute and a half, in order to hold our ever-shortening attention spans.

At the same time, I suspect that men included in the Hollback! video were those that enacted the most egregious forms of harassment, on that particular day, to that particular woman. The thing about injustice is, it isn’t predictable — it doesn’t follow a pattern. In all of my years living in New York City, I’ve logged thousands of hours pounding the pavement. I’ve had days that were harassment free, I’ve had others that have resulted in me making calls to 911. But my experience is just one of several million other women that live here, and I can’t speak for all women of color, but I can speak to my own experiences, which brings me to an uncomfortable truth. In all the years I’ve experienced street harassment, the overwhelming majority has come from Black and Latino men.

As Omilaju Miranda writes in “Some Uncomfortable Images are True: Problems With the Viral Catcalling Video Backlash,”

And white men catcalling and pulling at us on the street is not what most New York women experience the majority of the time. For New York City, the racial representation of catcalling in this video of Shoshanna Roberts walking around rings true. And when it comes to exposing misogynistic, intrusive behavior, I don’t care about the way these images of Black and Latino men catcalling and stalking link to our national memories of false and unjust representations of innocent or imaginary black men who were not predators. Black and Latino men are not the victims here. Women are the daily victims and hourly survivors of catcalling, verbal aggression, and physical molestation on the sidewalks of New York City.

But again, my experience is only my experience. A lot of harassment stems from familiarity and entitlement. I’m noticing a lot of women of color trying to add nuance to the conversation by stating harassment they’ve experienced at the office, at a bar, or in countries like Italy, Spain, and New Zealand. While I’m not trying to invalidate their experiences, I do think that these observations don’t add to the conversation but simply obscure it. Hollback! is a street harassment organization, not a general harassment organization. Hollaback! is also based in the United States, and therefore is working in the cultural context of how we see race in the United States. After all, race is a social construct and is filtered differently in different parts of the world. There are people in the United Stats that are considered black here, that wouldn’t be viewed as such in other parts of the world, conversely there are people in the United States that are considered white that also wouldn’t be viewed as such in other countries. Additionally, such labels aren’t utilized the same way in countries that are racially homogenous, but not necessarily ethnically or culturally so.

I think it’s important that, no matter what, the focus of this conversation remains squarely focused on the women being harassed — all of them. In the past, Hollaback!, which has since apologized for the racial dynamics portrayed in the video, has done a poor job of directly addressing criticisms related to race. So many factors affect how one might experience harassment. In the Jezebel video linked above, one of the women included is a trans woman. The voices of LGBTQ women of all colors have been largely excluded for some time in this conversation. Additionally, factors like body type, size, height, skin color, and even the semblance of racial or gender ambiguity, can affect how a woman might experience street harassment or harassment in general. The unifying thread, is that we all experience it in some way shape or form due to societal attitudes that women are not entitled to personal space, physically or emotionally. Additionally, it seems like the main voices of men in this conversation, are of those who don’t see what’s happening in the video as harassment, rather than of men who want to support women and educate their fellow men.

That’s the problem with viral activism, it gives the public the most salacious snippet of a situation, leaving those of us who are left out of conversation to fill in the blanks in the best way we can in order to protect ourselves.

Comedian Attacked By Group of Men in D.C. After Rejecting Their Advances.

Alicia Keys Opens Up About Dealing with Street Harassment at a Young Age.